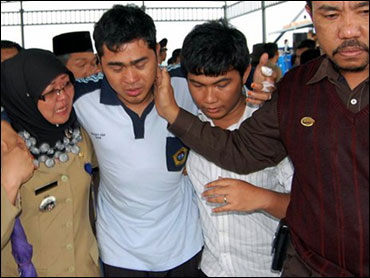 Rescuers plucked a woman from choppy waters Monday, some 25 hours after she jumped from a crowded ferry that sank in a storm off Indonesia's Sumatra island. At least 29 people drowned, and 20 others were missing.

A total of 255 survivors have been pulled from the sea since Sunday when the Dumai Express 10 was hit by towering waves and sank about 90 minutes into an inter-island trip from Batam to Dumai in Riau, a province off Sumatra island in western Indonesia. A second ferry ran aground nearby, but all its passengers were said to be safe.

The rescued woman in her 30s was spotted by fishermen, and she was in stable condition in a hospital, said Lt. Col. Edwin, a navy officer. Like many Indonesians, he only uses one name.

"Fishermen saw her floating with a life jacket on the rough sea in the rain ... She is very tough," said Edwin.

The woman was the only one found Monday, he said. Among those missing are six children and four old women, said Rustam Pakaya, the head of the Health Ministry's crisis centre.

Edwin said some passengers may have been trapped in the capsized ship, according to survivors. Authorities have recovered 29 bodies from the water, including those of two children.

Indonesian ferry accidents have killed hundreds of people in recent years. Boats are often overcrowded, and safety regulations are poorly enforced. The vast country spans more than 17,000 islands, and boats are a popular and relatively cheap form of transportation.

The bad weather led to a halt in ferry services Monday in Riau province, off Sumatra. Thousands of passengers wanting to travel to other islands and neighboring Singapore were stranded at several ports, said Soegiyono, a port official, who also only uses one name.

He could not say when ferries would be allowed to resume sailing. The Meteorology and Geophysics Agency has forecast high waves and rain until Thursday.