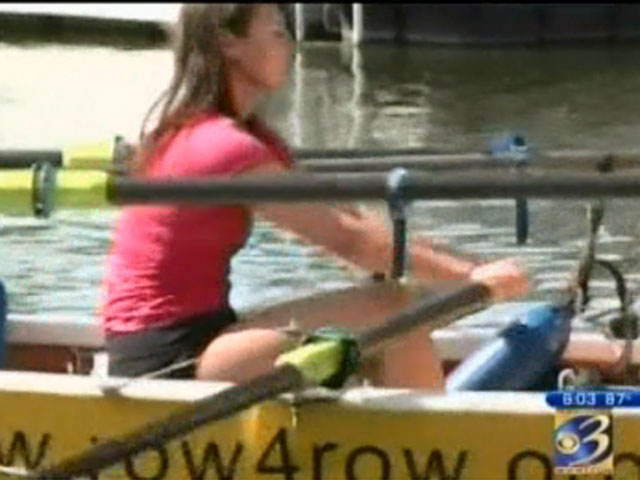 (CBS/WWMT/AP) TRAVERSE CITY, Mich. - Five weeks ago, a 27-year-old Chicago woman set off on a 1,500-mile rowing journey on Lake Michigan to raise money for breast cancer survivors, blogging along the way.

Police say someone following her voyage online may have used the information to harm her in a sexual assault.

The alleged victim, Jenn Gibbons, says she decided to blog about the attack, too, writing, "I know that I had a choice in telling people about the details of my attack, particularly that it was a sexual assault. To go through this at all, let alone publicly, is extremely difficult."

Police say Gibbons, who set off on June 15, was sexually assaulted about 4 a.m. Sunday in the vessel's cabin while moored along the shore in Michigan's Upper Peninsula. The station reported she's going public about the ordeal to help catch the assailant and send a message of strength to others who've been assaulted.

According to WWMT, state police investigators near where the attack happened in St. Ignace said the assailant may have traveled a significant distance.

Gibbons is co-founder of a rowing team for breast cancer survivors. She was making the trip to raise money for new boats.  Originally from Battle Creek, Mich., she planned for the excursion to be the first solo rowing trip from Illinois to Michigan along the lake's entire perimeter.

Gibbons says she will finish her journey, now by bike and boat. But she'll no longer travel alone.

The suspect is described as a white male in his 30s, approximately 5'8" to 6'0" tall, with a fair amount of facial stubble. He's said to have light eyes, an average to athletic build and short, well-kept hair.

He was wearing a grayish-green T-shirt, jean shorts and tennis shoes.

A bright yellow Jeep Wrangler was seen in the area, with a spare tire on the back and a tire cover bearing a yellow smiley face on it.