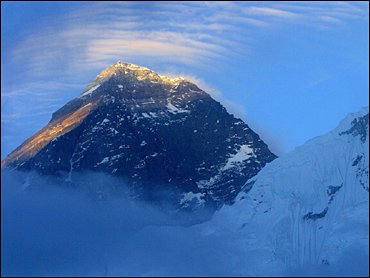 Usha Bista nearly died on Mount Everest. The Nepalese mountain climber got sick about 2,000 feet below the summit and says her climbing partners kept going and wouldn't even leave her food and water.

But Meagan McGrath, a 29-year-old Canadian, saved Bista. Her heroics have now been honored by the Everest mountaineering community. She was on her way down from the summit last week when she came across Bista.

Bista, 22, is now recovering from her near-death experience. She now has a case of frostbite to show for her ordeal, but at the time she was suffering from an often lethal form of altitude sickness, a swelling of the brain called cerebral oedema.

"I was very concerned that she would die," McGrath told CBS News correspondent Mark Phillips. "I was not sure what I was going to do at that time. But, yeah, she was definitely deteriorating to the point of death, basically."

McGrath and two other climbers took Bista down to a camp where she could be treated by doctors.

The rescue of stricken climbers has become a controversial issue on Everest, where climbing the world's highest peak has become a popular activity. There have been cases where climbers have simply been left to die as others continued on to try to fulfill their once-in-a-lifetime dream. Bista, however, was lucky.

"I saved her life but she was also dying in my hands, too," McGrath said. "It was a very tenuous situation, where I did not have everything I needed to help her."