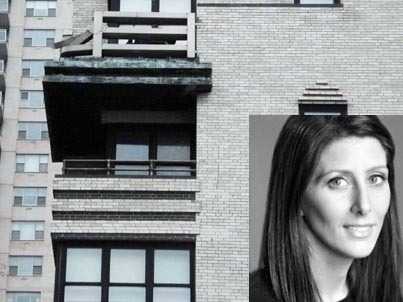 NEW YORK A 35-year-old woman on a first date plunged to her death Thursday after the railing on her 17th-floor New York City balcony gave way, police said.

Jennifer Rosoff went outside for a cigarette around 12:50 a.m. when she either sat on the railing or leaned on it.

Her date told her that she probably shouldn't do it, and then moments later, she apparently fell backward and landed on construction scaffolding at the first floor, authorities said. Police spoke to the man and no foul play was suspected.

Emergency crews pronounced Rosoff dead at the scene. The medical examiner will determine a cause of death.

The gray brick high-rise building on Manhattan's Upper East Side was built before World War II.

Only the higher-floor corner apartments have balconies, and the city's buildings department ordered residents to stay off them.

A photo of the corner balcony of the apartment where Rosoff lived shows the top two metal railings bent down in a V-shape.

Buildings officials took part of the broken railing to examine how it could have given way and plan to determine whether the other balconies are structurally sound.

Rosoff worked at The New Yorker, Lucky Magazine and Cosmopolitan before recently joining a new media advertising startup called TripleLift, according to her LinkedIn profile.

No one at TripleLift answered calls Thursday. She attended Tulane University in New Orleans.