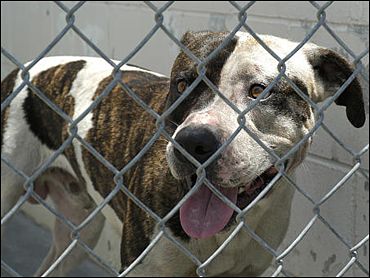 Three pit bulls attacked a power company worker Tuesday, tearing off the 56-year-old woman's ear and part of her scalp.

Carol Dennison, a 20-year employee with Florida Power & Light Co., was taken to a hospital for surgery. FPL spokesman Sandy Sanderson said Dennison's injuries were critical but not life-threatening.

The woman was approaching a fenced-in back yard to read a meter when the dogs jumped the fence and attacked. The worker escaped to her vehicle, then drove about a half-mile before stopping at a home for help. People there contacted authorities and administered first aid.

Florida Power teaches employees defensive measures in dealing with dogs, and provides pepper spray and a device which expands like an umbrella to frighten attacking animals.

Capt. David Polomski of Brevard County Animal Services and Enforcement said the dogs were picked up and quarantined. After the quarantine, an independent board will decide whether they will be returned to their owner or possibly put to sleep.

The dogs' owner, David Teuche, could be fined as much as $2,160 for several dog-related counts, Polomski said. He previously had been fined $40 for having a loose dog.

No phone number was listed for Teuche and he could not be reached for comment.