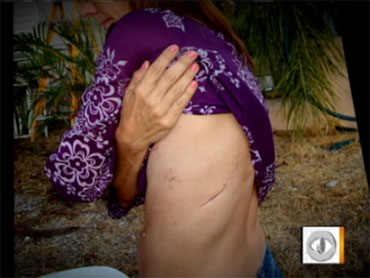 A Florida woman is lucky to be alive after a bizarre incident while she and her boyfriend were kayaking in the Florida Keys. A fish jumped out of the water, hitting her so hard it broke her ribs and collapsed a lung.

She struggled to breathe and was in desperate need of medical attention.

In a 911 call, Larson's boyfriend can be heard saying, "Yes, I've got an emergency. My girlfriend's been hit by a flying fish. I think it was a barracuda or something."

First thought to be a needlefish, Larson says it was a barracuda that attacked her out of nowhere.

She saw it jump out of the water twice, and on the third jump, it dove toward the couple's boat and hit her on the side.

Hinojosa said on the call, "It came diving past the kayak, and hit her broadside, knocked her out of the boat and she's got, like, broken ribs and punctured lungs."

The operator asks, "She has a punctured lung?"

Hinojosa said, "Yes, sir. I have my hand holding her lungs closed."

Another operator responds, "Ok, sir, I need to know where you're gonna come in to."

"I'm holding her ribs with one hand," he responds. "I cannot paddle this kayak anywhere right now. I need you guys to come to me."

Getting to them would be no easy task in the Florida backwaters. Towboat owner Kevin Freestone volunteered to help search. He spoke to Hinojosa on the phone.

Freestone told CBS News, "He knew exactly what to tell me and he told me, he said, 'You need to get here as quick as you can. You need to save a life today."'

It had been about 30 minutes since the original 911 call, and time was running out.

As Larson clung to life, she was transported back to the marina, then airlifted to a Miami hospital and taken straight to the intensive care unit.

Larson survived, but remained in the Intensive Care Unit for nine days, recovering from a shattered rib and a punctured lung.

In an exclusive "Early Show" interview Monday, Karri Larson and Michael Hinojosa, of Big Pine, Fla., and Kevin Freestone, of TowBoatUS, shared the story of what happened that day.

Larson said she's still in a lot of pain, but her condition is improving every day.

Larson explained, "The hole -- it opened a hole right up in my side. Shattered a rip where they eventually had to remove the rib and just pick pieces out, because it was just in little shards inside me and punctured my lung."

Hinojosa explained how it happened. He said, "We were out north of Big Pine, which is the island that we live on, feeling we were really safe. I spotted in the distance a giant barracuda coming in our general direction, probably 40, 50 miles an hour, really moving fast and skipping across the water. We've never seen a fish of this size jump before. I certainly didn't expect what happened to happen. It exploded on our left. Karri never saw it. It hit here in the ribcage and threw her out of the boat. It was moving really fast. It shattered her ribs, like she said. I had her scrambled back onto the boat and when I saw the wound, she had a hole in her side. ... I cupped my hand over it, her lung was trying to pop out into my hand. I realized then that she might not make it and I was really, really scared. I didn't know what I was going to tell her family if she didn't make it."

Larson said she realized just how extensive her wounds were when she was pulled aboard the kayak.

She said, "I had a towel, and I looked down and it was just completely saturated with blood, so I knew I was losing, you know, a lot of blood. And then, from the way I was breathing and the extent of the pain, I could tell it was a rib injury, and could hear the gurgling, so I knew I had punctured lungs."

As the couple waited in the boat, Hinojosa, holding her lung closed, ajd Larson talked about the days to come.

"She didn't want to talk about the injury," Hinojosa said. "She wanted me to talk about positive, happy things. So I began realizing, she's going to have a lot of time off of work, so I started talking about potential vacations we could take. Places that I could take her to visit. She'd never been to Europe. I pestered her into getting a passport, so she has a passport. I wanted to take her to Europe. So I began trying to distract her away from what was actually happening. Because it was just too long."

And then, finally, Freestone arrived.

"We shot across (the water) over there and got up alongside and you could see she was in pain, but very coherent, sitting pretty strong. Mike's sitting there, put the paramedic on the boat, and the paramedic looked at me after he looked at the wound, he says, 'Get me inclusive dressing,' and he's looking around like, this is bad. I knew it was a second chest wound, and it just was really serious."

Larson said she was thinking of her daughter through the ordeal.

"One of the first things I thought of is she's getting married June 30. And I need to be able to walk her down the aisle," she told Wragge. "And so I just kept thinking that in my head, you know, keeping positive thoughts. And just waiting. Waiting. That was the hardest part."

Larson said, "Well, we worked on that. We would go to a restaurant near the dock and sit there by the fish. Our house is on the water, so it's -- it's hard. I've been out on a boat twice since then. Just recently. And I did pretty well. I did pretty well."

Recently, Freestone was given the Coast Guard's Public Service Commendation Award for his actions last October. The award is for acts of courage or assistance in Coast Guard missions.