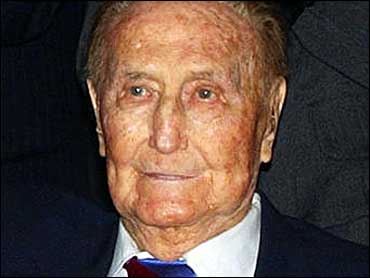 A 78-year-old California woman is expected to break her silence this week and publicly share a secret she's guarded for a lifetime - that she is the illegitimate mixed-race child of the late Sen. Strom Thurmond (R, S.C.) - once one of the nation's leading segregationists.

The revelation sheds new light on the legacy of one of the nation's most prominent -- and controversial -- political figures.

According to an article that will appear in Sunday's edition of the Washington Post -- the woman -- Essie Mae Washington-Williams -- claims Strom Thurmond was 22 and still living with his parents in this South Carolina house -- when he had an affair with the family's 16-year-old black maid -- who was her mother.

While Thurmond went on to study law, Williams was taken to Pennsylvania, where she was raised by an Aunt.

In the years that followed, Thurmond helped shape the political power structure in the South and lead the opposition against civil rights legislation in the 1950's and 1960's.

On several occasions he angrily dismissed rumors of the existence of a mixed-race daughter.

Thurmond said late in life through his office that Williams was a friend, the Post reports.

Despite his public denials, Williams claims Thurmond met repeatedly with her in private -- and supplied her financial help until his death in June at the age 100.

The Post says she always denied she is Thurmond's daughter. But now, the Post quotes Williams as saying, "I want to bring closure to this. It is a part of history."

CBS News Correspondent Dan Rather says, "If she is to be believed, then he quietly claimed her, did support her, helped her to get an education, helped one of her son's to get into medical school."

"So far as I know," Rather continued, "there has been no DNA testing, although Ms. Williams says that she is prepared to submit to DNA testing now to prove her claim.

"The woman in Los Angeles says that she has a number of documents to support her claim. According to her, these documents include letters, some check stubs -- if not, in fact, checks -- and notes and other pieces of memorabilia from Thurmond."

Rather noted that, "There will be people who see this as an indication of just how much hypocrisy there was among some segregationists at the height of the time when segregation was the law in these states, and in some ways, the law of the land."

"What she has said," Rather added, "to CBS News and the Washington Post, is that she wanted to protect Senator Thurmond, and herself, and her children -- and that she had the deepest respect for Sen. Thurmond when he was living, and especially did not want to do anything while he was living.

"Senator Thurmond is dead and cannot speak for himself, and the family of Sen. Thurmond, they have not had a chance to respond," Rather concluded.

Washington Post Editor and Reporter Marilyn Thompson has been investigating this story for 25 years. She told CBS News, "What I felt from the very beginning when I heard about this charge, was that if it were true that Thurmond had run in this country as a Segregationist - as a Dixiecrat in 1948 - while secretly slipping money to a young black coed, at that time at a state-supported school in South Carolina, it would be an ultimate hypocrisy."

When asked if money is a possible motive here, Thompson said, "She has not made a formal claim against the estate, but it's significant to note that the estate has until June for any claims to be made against it. Her attorney insisted in an interview that they would not make a claim, but now we'll see what happens."