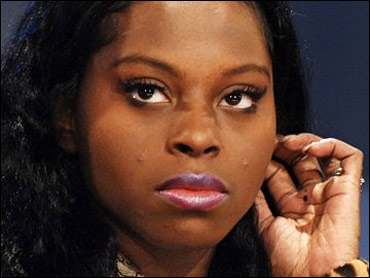 A woman charged with assaulting and robbing Foxy Brown was released from jail after the racy rapper failed to appear before a grand jury to testify against her.

Roshawn Anthony, 23, was released from Rikers Island on her own recognizance Thursday but still faces charges of robbery, assault and grand larceny in the alleged attack last Saturday, according to a spokesman for the Brooklyn district attorney's office. She has denied the charges.

Police say Anthony and three other people teamed up to rob Brown of a Louis Vuitton bag, $500 in cash and credit cards in the East New York section of Brooklyn.

The 27-year-old rapper, whose real name is Inga Marchand, is no stranger to violence. She pleaded guilty last year to misdemeanor assault charges stemming from a fight with salon workers over payment for a manicure and is on probation in that case.

She also faces a battery charge in another incident earlier this year — police allege she threw hair glue at a beauty shop employee in Florida when he asked her to leave because the shop was closing.

The Brooklyn-based rapper's albums include the platinum-selling "Ill Na Na" and "Chyna Doll."

Anthony is scheduled to return to court on Aug. 9.