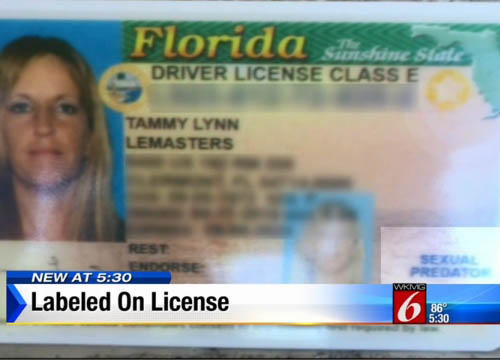 ORLANDO, Fla. - A Florida woman who was issued a driver's license that labeled her a sexual predator -- by mistake -- says she plans to file a defamation lawsuit against a county tax collector's office.

Tammy Lemasters, 42, said Thursday she was denied service when trying to book a room at a hotel, and has endured funny looks from cashiers when cashing checks because of the blue letters in the bottom-right corner of her license that say "SEXUAL PREDATOR."

She has already filed a notice of intent to sue the Lake County Tax Collector's office, near Orlando. The office serves as an agent for the Florida Department of Highway Safety and Motor Vehicles in issuing driver's licenses. She went to the tax collector's office Thursday, accompanied by her attorney and television cameras, to get a new driver's license almost three weeks after she first noticed the mistake.

The manager of the office where Lemasters got her license attributed the mistake to human error.

"We said we fully understand the embarrassment she faced, but these are humans doing a human job," said Mark O'Keefe, the manager. "People make mistakes. When we find them, we move swiftly to correct them."

When drivers get new licenses, they are told by workers in the tax collector's office to double-check that everything on the ID is accurate, O'Keefe said.

According to O'Keefe, Lemasters called the office four days after discovering the mistake and was told to come back right away so the problem could be fixed.

"If you misspell 'Main Street' on a driver's license or put the wrong initial in the name, people are back in here in a half-hour, if not the next day, to have it corrected," O'Keefe said.

Both O'Keefe and Lemasters' attorney theorize that the mistake was made when the wrong drop-down box was checked on the computer. The motor vehicle agency software is being updated and one of the changes being proposed includes adding a "pop-up" window that would ask workers issuing the licenses whether they are sure when they are clicking "sexual predator."

Lemasters said she didn't notice the mistake until several days after getting the new license. She had to go to traffic court for a ticket and noticed the judge and bailiff studying the license quizzically. Afterward, while she was at a store, she noticed the 'SEXUAL PREDATOR" label on her license and "I immediately had tears in my eyes."

Her attorney, John Phillips, said he knew of two similar instances in Florida, including a Jacksonville case in which he represented a legally blind man who had sued the Duval County Tax Collector's Office.

"It reminds me of 'The Scarlet Letter,'" said Phillips, referring to the 19th century literature classic about a woman ostracized for having a child out of wedlock in Puritan Massachusetts. "This is the worst thing you can call a person."