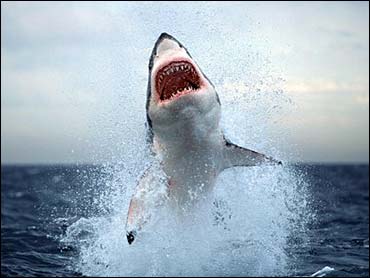 A great white shark estimated to be at least 18 feet long attacked and presumably killed an elderly South African woman Monday off a beach near Cape Town, officials said.

Tyna Webb, 77, who lived in the area, was swimming Monday off Sunny Cove in Fish Hoek when the massive shark circled her and then attacked, witnesses and officials said. About 15 people witnessed the attack.

"All that was left was a little red bathing cap," said Paul Dennett, who witnessed the attack from his home nearby.

Dennett told the South African Press Association that he estimated the shark to be at least 18 feet long.

Rescue workers were using boats and aircraft to search for the woman's body.

"All efforts to find the lady have been exhausted by a wide and thorough search. We are hoping that police divers will be successful in their efforts," Darren Zimmerman of the National Sea Rescue Institute told the South African Press Association.

Crews later spotted the shark. Great whites often are seen in the area feeding off the large seal population.

"The shark is bigger than the helicopter ... it is huge," institute spokesman Craig Lambinon told SAPA.

Law enforcement officials advised people not to swim along the Cape of Good Hope.

A 16-year-old surfer lost his right leg in an April attack by a great white shark in the same area.

The last confirmed, unprovoked fatal shark attack in South Africa was in 2003, according to the Florida Museum of Natural History's International Shark Attack File, which has gathered such data worldwide for decades.