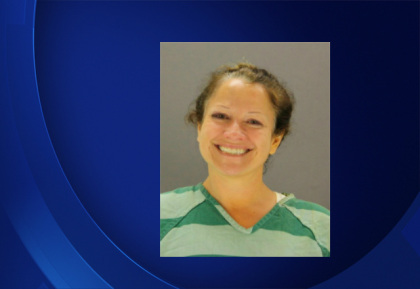 DALLAS, Texas - A Texas woman says she was looking to release her anger when she broke into a yoga studio and set fire to it, reports CBS DFW.

The door to American Power Yoga in Dallas was boarded up Monday, but the manager tells the station the damage is minimal, and they are moving forward with regularly scheduled classes. Nancy Duarte -- who goes by Suzanne -- admits she's responsible for the damage, and she wants people to know why she did it, according to the station.

"Most people can't understand the smiling mugshot," Duarte said through glass at a visitation room in the Dallas County Jail.

It's an unusual -- nay, strange -- expression for someone who's just been arrested for trying to burn down the yoga studio where she practiced, but says she smiled in her mugshot because, well, she's trying to let go of her anger. That, she told the station, is why she went to American Power Yoga Saturday in the first place, carrying a baseball bat and a can of gasoline.

"I thought it was going to make me happy... to burn the place that had brought me so much pain and suffering," Duarte told the station.

Duarte claims to have longstanding disputes with two men associated with the yoga studio.

"He kept hitting on me and kept trying to make me the girlfriend on the side," Duarte said about one of the men.

She says both men continued to harass her for years in and out of the studio.

"Even as I'm walking out the door, he kept trying to put his hands on me, and I was like, 'No!,'" Duarte said.

On Saturday, Duarte says she waited until it was late so no one would be at the studio.

"Just to set it on fire, just destroy it, get rid of the devil's temple," Duarte told the station.

She insists she had no intention of hurting anyone, but a witness points out the entire shopping center could have gone up in flames.

Nonetheless, Duarte says the only regret she has is that the studio didn't burn, reports the station.

A spokesperson for American Power Yoga says the studio has been under new ownership since November, and until Saturday they were unaware of any dispute.