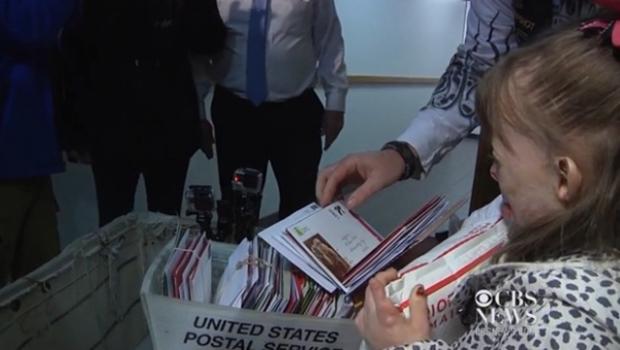 ROTTERDAM, N.Y. -- One of the volunteers who helped open Christmas cards for eight-year-old burn victim Safyre Terry has been charged with stealing money from the cards.

Police say 41-year-old Kimberly Bradford of Rotterdam was charged with fourth-degree grand larceny Thursday. Bradford was one of dozens of volunteers who helped open more than a million cards sent to the Schenectady County girl who lost her family in the arson fire that left her severely burned.

Cards and gifts poured in after Safyre's wish for Christmas cards went viral online. The cards included a personal message from the White House.

Many of the cards contained cash and/or gift cards to local retailers, CBS affiliate WRGB reported. Organizers of the Safyre's Angels organization received information that some volunteers may be stealing from the cards and contacted police.

Bradford was arraigned and jailed on $5,000 bail. Police had no information on whether she has a lawyer to comment.

The investigation is ongoing and police said additional arrests are possible.

In addition to gifts enclosed or sent with the cards, the nonprofit Baking Memories 4 Kids said in December it was sending Safyre to the Disney theme parks in Florida in March, and more than $400,000 was donated through a crowdfunding website.