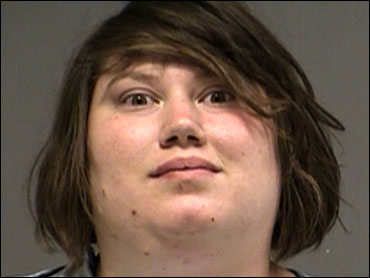 Paramedics rushed both her and the infant to the hospital. The baby did not survive, but police became suspicious of Roberts after doctors noticed she bore no signs of pregnancy. Police then found the 21-year-old newborn's mother, Heather M. Snively, in a crawl space in Roberts' home in Beaverton, a Portland suburb.

Roberts was charged with murder in Snively's death and could face charges in the baby's death as well, Thompson said. She was being held without bond and the jail did not list an attorney.

Autopsy results were scheduled to be released today and Thompson would not say whether Snively, 21, gave birth before she died or the baby was removed. Police have not released a motive for the killing.

"I guess they decided to meet and I guess that was the wrong thing to do," she said. "But Heather's always been a very trusting person."

Thompson said detectives have not confirmed the women met through Craigslist.

Roberts has two children, both under 10, who were staying with relatives and not at home when police believe Snively was killed, said Sgt. David Thompson of the Washington County Sheriff's Office. Kidd said her daughter was eight months pregnant.

Kidd said her daughter was eight months pregnant and Snively's Facebook photo shows her lifting a pink shirt to expose a large belly.

Snively and her boyfriend, identified by Kidd as Christopher Popp, recently moved to Oregon from Maryland because he got a better job. Popp, the baby's father, reported Snively missing Friday night and is not a suspect, Thompson said.

Kidd said her first grandson was to be named John Steven.

"I'm still in shock; it hasn't hit me," she said. "I mean, that initial phone call; I just couldn't believe it. I just could not believe I was talking about my own child."