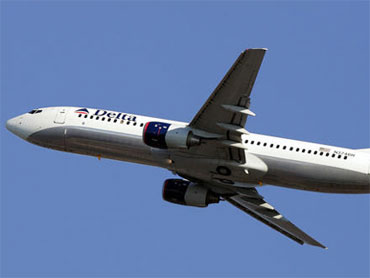 (CBS/AP) ANCHORAGE, Alaska - A first-class passenger became so disruptive after drinking five glasses of wine within the first 90 minutes of her flight from New York to Shanghai that the plane had to be diverted to Anchorage, charging documents say.

Auerbach, who owns the Stephanie & Co. fashion company in Shanghai, was traveling with two children on Delta Airlines flight 181, which was en route from New York to China via Detroit.

Charging documents, which include information from FBI agents' interviews with crew and other passengers, say Auerbach drank five glasses of wine within the first 90 minutes of the 7,100 mile trip from Detroit to Shanghai. The documents say she began walking up and down the aisle, yelling profanities and climbing on seats. Passengers told the FBI she also sneaked drinks out of the galley when the crew wasn't watching.

A flight attendant asked her to return to her seat, A1, five times and she declined, the charging documents say.

"Auerbach spilled alcohol on passenger A.J. and grabbed A.J.'s wrist to place a bracelet on A.J. (She) declined to wear the bracelet and asked Auerbach to leave her alone," the documents say. "In response, Auerbach swore at A.J. and demanded that a flight attendant give her A.J.'s name. A flight attendant intervened and returned Auerbach to Auerbach's assigned seat. Auerbach alarmed A.J. and it appeared to A.J. that Auerbach was attempting to gain access to the pilot."

Auerbach was issued a written notice notifying her that she had refused an order from the flight crew regarding safety. The documents say she then hit the attendant with the notice, approached the flight attendant and demanded off the flight.

The pilot, who was only identified by the initials W.R., intervened and asked Auerbach if she would follow the crew's instructions. She declined, and the pilot then diverted the flight to Anchorage.

"The flight crew is in charge of the safety of the aircraft and the passengers on board, and they did what they thought was necessary in this case," Delta spokeswoman Leslie Scott said.

Anchorage's Ted Stevens International Airport police had to board the plane and remove Auerbach, and the charges claim she was "physically combative." She was detained and charged.

The two children traveling with Auerbach were allowed to continue to Shanghai on the condition their father would pick them up at the airport.

Auerbach was being held at the Hiland Mountain Correctional Center for women on Tuesday. Her Anchorage-based attorney didn't immediately return a call for comment on Wednesday, nor did the state Department of Corrections to verify she was still at the jail.