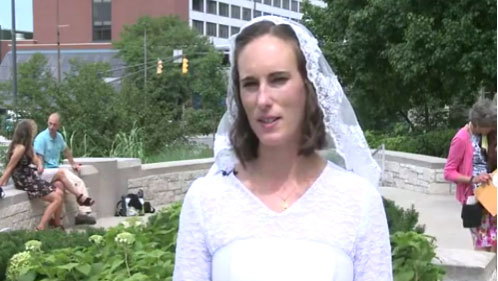 FORT WAYNE, Ind. -- Hundreds of people gathered in downtown Fort Wayne, Indiana at the Cathedral of the Immaculate Conception over the weekend for an unlikely wedding ceremony.

A consecrated virgin is not the same as a nun. Hayes will still live her life as a lay person.

38-year-old Hayes is a high school theology teacher. She told WANE that this decision represents years of prayer and soul-searching.

"I had been praying about it for years, trying to seek God's will for my life and not really finding it in any of the paths that I sought before," she said. "It was really a consideration of which things brought me the most joy and where my greatest happiness was."

While it may not have been an average wedding ceremony, Hayes did face some of the same struggles that most brides face, such as finding the perfect wedding dress.

"I've seen so many wedding dresses over the years that I think I've probably changed my mind very many times," she told CBS affiliate WANE. "I had to really consider the appropriateness of the occasion for my dress. I wanted my shoulders to be covered, and I would have to lie prostrate before the altar, so I really wanted to make sure that I was well-covered in a way that still shows the beauty of a bride."

Hayes explained to WANE she will still go by Ms. Hayes, not Mrs.

"My students asked if they should call me Mrs. Hayes when I come back to school next week, and no, I'm still Ms. But, I am married to Jesus," she said.

Hayes believes in some sense, all people are called to be married.

Hayes said this is a vocation for women who feel a deeper call to spend their life more in knowing with Jesus. She chose to make a public commitment in serving the church. And she said she hopes her experience will help increase vocations among women.

"I do think that not everybody has the same path," she said. "To be able to look at all of these different ways of life and to see people living them out joyfully is an invitation to consider a little bit more deeply what those things mean. As Catholics and as Christians, we're all called to that loving relationship with our God. So, I'm called to live it out in this way."