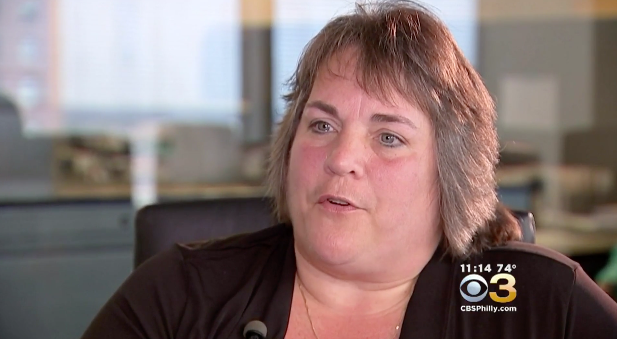 PHILADELPHIA -- A record jury verdict of $57 million against Johnson & Johnson was awarded to a Pennsylvania woman who was injured by a product that thousands of women have.

"It was a very happy day, but I was still sad and depressed," Ella Ebaugh told CBS Philadelphia. "I'm in excruciating pain when I'm standing, it hurts when I'm sitting."

Ebaugh, 51, was in too much pain to enjoy her daughter Jamie's wedding.

"It makes her upset but I still love her, she's still a wonderful mother," said Jamie Dang.

She'd been active on a softball team, busy with her family and like millions of women, suffered from stress urinary incontinence.

For women like Ebaugh, who need surgery, pelvic mesh is often used to reinforce tissue around the urethra.

"My urethra is mangled and I will suffer for the rest of my life," she said.

The mesh used in Ebaugh's surgery was made by Johnson & Johnson's Ethicon unit. It eroded into Ella's urethra. Three revision surgeries later some of the mesh remains embedded.

"I feel like I'm on fire you know down there," she said.

Ebaugh is among an estimated hundreds of thousands of women who have mesh made by Ethicon. Thousands of lawsuits have been filed nationwide.

Lawyer Kila Baldwin, with the Kline & Specter Law Firm in Philadelphia, is representing Ebaugh and a thousand other women in Philadelphia lawsuits against Johnson & Johnson.

"The company was reckless and the company totally ignored the real serious risk of permanently injuring women," Baldwin said.

A Philadelphia jury awarded Ebaugh $57.1 million finding that Ethicon was guilty of negligence and its product was defectively designed.

Ethicon is expected to appeal the case.

"Ethicon is confident in the positive impact our pelvic mesh products have had. The use of mesh to treat stress urinary incontinence is supported by medical experts, medical societies, physicians and regulatory organizations around the world," the company said in a statement.

"That flies in the face of the evidence that was put in front of the jury in this case," Baldwin said.

The FDA has received thousands of complaints about pelvic mesh made by a number of different companies and used for several gemological problems.

Ebaugh's family worries about others struggling, like they do, as they try to move forward.

Major medical groups say there are potential complications with any surgical procedure, but that pelvic mesh is safe and helpful for the majority of patients who have it.