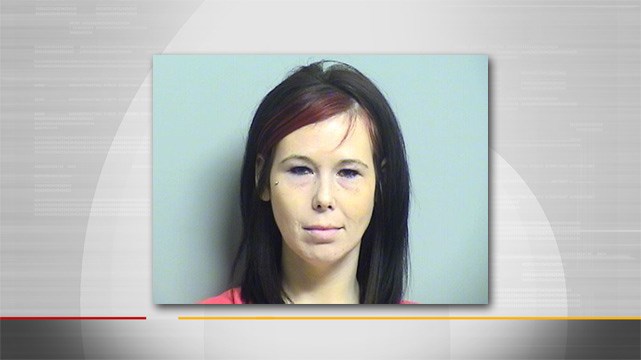 TULSA, Okla. - An Oklahoma woman already accused of slashing the corpse of her boyfriend's ex-girlfriend at a funeral home viewing last month was taken back into custody Monday after bond was set on an additional charge accusing her of removing body parts of the dead woman.

A Tulsa district judge set a $10,000 bond for 26-year-old Shaynna Sims. Prosecutors had argued last week that a high bond amount was required because of the recent charge that Sims removed the dead woman's breasts and a toe at the funeral home.

Sims, wearing oversized sunglasses, walked over the bailiff, who cuffed her and led her out of the courtroom. When Sims was gone, a handful of family members of the dead woman politely clapped.

A message left with Sims' attorney seeking comment wasn't immediately returned Monday. A man identified on Sims' arrest report as her husband said he was working and unable to talk about the case.

Sims was arrested at the dead woman's apartment after she attended the viewing on April 30.

Witnesses told officers they saw Sims reach into the casket during the viewing. The dead woman's face was found slashed from her hairline to the tip of her nose, her makeup was smeared and her hair was on the floor, police said. They said Sims also stole the dead woman's shoes and was carrying a knife with the woman's hair attached to it.

The additional mutilation of the woman's body was discovered as it was being prepared for cremation.

It's unclear what happened to the body parts Sims is accused of removing, and Tulsa Police Sgt. Shane Tuell said Monday authorities are still trying to get Sims to talk.

One of the relatives of the deceased woman, JuliAnn Nixon, said she'd be able to "sleep better tonight" knowing Sims would be in jail.