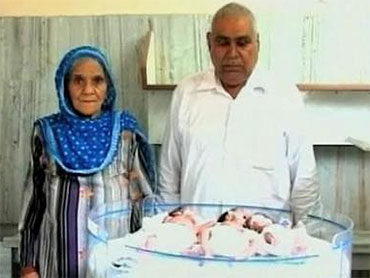 Bhateri Devi, 66, wanted to be a mother all her life. And now she finally is - three times over. Devi, who is now thought to hold the title for the oldest mother of triplets in the world, gave birth after undergoing in vitro fertilization treatments at a well-known fertility center in India.

How soon Devi and her husband of 44 years will be able to take their children home is yet to be determined, reports London's Daily Mail

The health of the two boys and one girl remains precarious. At only 2 pounds 6 ounces, 2 pounds 4 ounces and 1 pound 7 ounces, they are seriously underweight and are being monitored in the intensive care unit of the National Fertility Centre in Indian state of Haryana.

Deva Singh, her husband, is delighted nevertheless. "Bhateri has fulfilled my dream of having a child and gave my family an heir," he says. "She was my first wife and after she failed to conceive a child, I married twice but again I did not have any child from my other wives also."

IVF is a procedure in which a woman's egg is fertilized outside of her body. An increasing number of couples are seeking fertility treatments in India, where regulations are less than stringent, according to
MSNBC.

The Indian Centre is also responsible for the pregnancy of the woman who has been dubbed the world's oldest mother. Rajo Devi Lohan, 72, has an 18 month-year-old daughter with her husband, Balla, who is 73. It is impossible to verify her age, as they have no birth certificates, reports the New York Daily News.

But Lohan is no longer healthy. She is weak from the removal of a large ovarian cyst and said that though she has no regrets, she fears she "is dying." She is bedridden and too weak to even lift her child.

Experts say having a child so late in life is very risky for mother and child, and there is controversy brewing over whether or not the doctors at the centers like these are acting in the best interest of women like Lohan and Devi.
But for the proud new father of triplets, he swears it's all been worth it.
"I am very happy and I will provide all the best facilities to my children in the coming years," he said, according to the Daily Mail.