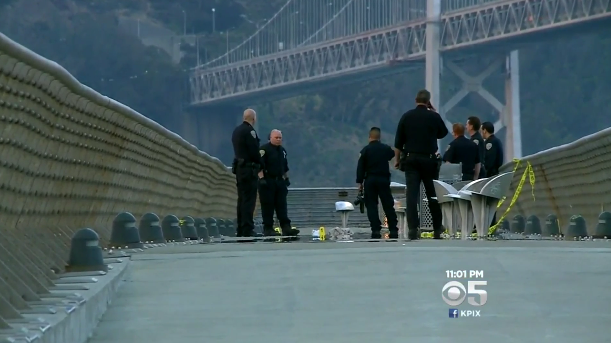 SAN FRANCISCO -- A 31-year-old woman was fatally shot in broad daylight as she walked along a San Francisco pier, and now authorities have taken a person of interest into custody, reports CBS San Francisco.

The woman, who was shot at least once in the upper torso, was transported to San Francisco General Hospital where she was later pronounced dead, according to police. The San Francisco Gate identifies her as Kathryn Steinle, of Pleasanton.

Authorities say the woman was walking with her family along the pier at the time she was shot.

Officers detained a person of interest shortly after the shooting, according to CBS San Francisco.

The San Francisco Gate reports authorities say the shooting appears to have been random. The paper identifies the person of interest as Francisco Sanchez, who is approximately 45 year old and whose last known address was in Texas.

The paper, citing officials, says Sanchez - who was on probation - was jailed on suspicion of murder in connection with Steinle's death.