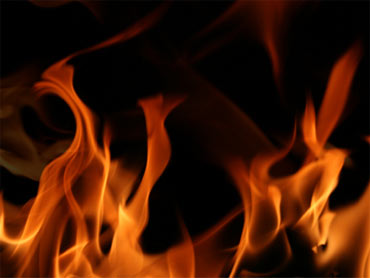 (AP) SHENANDOAH, Pa. - A fire destroyed five row homes in northeastern Pennsylvania early Tuesday, killing a woman and three children in one house while a fourth child managed to escape out a second floor window as the flames closed in, fire officials said.

The blaze spread quickly, and the buildings were fully engulfed when crews arrived within minutes of the 6:30 a.m. call. Firefighters attempted a rescue, but they made it only a short distance inside the front door of the victims' home before having to retreat.

The Schuylkill County coroner's office identified the victims as Tiffany Sanchez, 28; her 10-year-old son Christian; and her two nephews, 10-year-old Damien Lopez and 7-month-old Aziah Hernandez. An autopsy was planned for Tuesday night.

Another son of Sanchez's, identified as Diego Sanchez, escaped from a second-floor window and was taken to a hospital for treatment.

Stephanie Rodriguez, 19, said she was sleeping when the fire broke out next door, and awoke to the sounds of people running and yelling. Her grandmother, with whom she shares a bedroom, opened the curtains to a blaze of orange, and smoke starting pouring through the walls, Rodriguez said.

The family fled, but Rodriguez went back into the house to rescue her dog. She said she heard a boy in the home next door screaming "Help me! Help me!"

It was Diego Sanchez. A few minutes later, Rodriguez said, she saw Diego outside the house and asked him what happened. She said he told her his mother pushed him out the window.

"All I remember is she pushed me, and the flames," he said, according to Rodriguez.

Mensick said he couldn't confirm that Tiffany Sanchez saved her son's life, but confirmed that Diego made it to safety from the second floor.

Sanchez lived in the home with her sister and their seven children.

The sister and three of the children weren't home at the time, Rodriguez said.

She said Tiffany Sanchez worked three waitressing jobs to support her family, and that the children enjoyed playing games and riding their bikes in the narrow street.