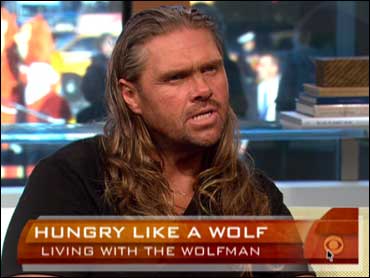 Many animal lovers own pets and live under the same roof, but for Shaun Ellis he took a giant leap further and decided to live amongst wolves in their natural habitat and joined their pack.

Ellis lives with wolves in the Combe Martin Wildlife Park in Devon, England, a feat that has even surprised scientists, who once thought it was impossible to do.

Although Ellis was living his dream, he admitted that there was something missing.

Ellis spent years studying wolves solo, but now he has made an unexpected addition to the pack - his fiancée, Helen Jeffs.

Jeffs may have been aware of Ellis' peculiar lifestyle, but she didn't realize the amount of hard work that goes into living with wolves, however.

The happy couple documented their unique journey on Animal Planet's "Living with the Wolf Man".

According to Ellis, his interest in living with the wolves was like a calling at an early age. Having been raised around animals, he was especially fascinated by nocturnal creatures.

"It was a steady progression up to wolves," he said.

Although the wolves are "captively raised," Ellis and Jeffs say they give the pack as much wild behavior as they can.

The couple has earned their way into becoming part of the pack, which isn't an easy task.

"It's a position. Every day you go in there, it's a battle for that position. You have to maintain your presence amongst them. You have to eat foods that meet that social positioning. If you steer off of that and have foods that we would eat - cakes, chocolates, that kind of thing - the respect for you from them goes down very, very quickly," Ellis said.

"Wolves are amazing creatures and they touch you in such ways that people just wouldn't ever dream about. I think they draw you as much as obviously falling in love with the man that lives with a pack of wolves," she explained.

The introduction into the pack was a scary experience for Jeffs.

"Absolutely terrifying. Shaun obviously gave me an immense amount of training and, like he said, it went down to diet, fitness, all sorts of sacrifices. So I was prepared when I went in there," Jeffs said.

For Jeffs, the word sacrifice now has a whole new meaning.

In a scene of "Living with the Wolf Man," Jeffs chews up her food and regurgitates it in order to feed one of the wolves.

"To prove my nannyship, really, to say that I could be a good nanny for the pups," she said.

The show is not only a fascinating perspective on wolves, but it's a great example of the lengths that love takes us.

According to Ellis, like a family member, you have to earn their trust in order to learn their secrets, especially if you are human.

"So in order for us to gain the knowledge that we feel we badly need to bridge this gap between the conflict between them and the farms and the ranches, we needed to get inside their pack," Ellis said. "And that's the beauty of this series. It gives you a look beyond the binocular, beyond scope. It takes you there with a window of eight or nine inches. This lady is in there down there feeding with snapping jaws, in feast or famine, it's incredible."

"Living with the Wolfman" premieres Tuesday, Oct. 21 at 10 p.m. on Animal Planet.