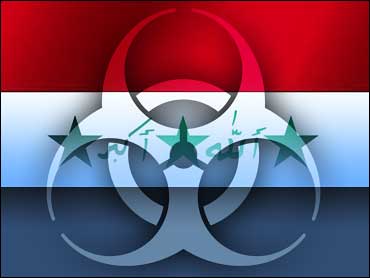 According to The New York Times, the Bush administration is considering transferring some intelligence officers and linguists from the weapons hunt to counterterrorism efforts. But officials stressed that the possible move would not signal the end of the weapons search.

The central argument in the case for war was the claim that Iraq had chemical and biological weapons and a program to develop nuclear weapons. To date, U.S. teams have discovered neither weapons nor active programs to produce them, raising doubts about the rationale for the March invasion.

On Tuesday, a top U.S. intelligence official said Iraq may have moved weapons into Syria before the U.S. invaded, and President Bush defended his decision to attack.

In the weapons debate, a key question has been whether intelligence agencies provided bad data or the Bush administration politicized the information it received.

"The information we were giving the policy community was off the mark," Ford said. He rejected charges that the Bush administration misused the intelligence.

That echoed a recent report that the Senate Intelligence Committee is preparing to fault intelligence agencies, especially the CIA, for using too much disputed, circumstantial or single-source data in preparing its estimates of Iraq's alleged weapons programs.

The CIA rejects criticism of the way it presented information on Iraq. The agency is preparing an internal review, expected in late November, of its intelligence work leading up to the war.

In their public advocacy for war, Bush administration officials often appeared to beyond what the CIA told them.

Twice in the fall of 2002, the CIA prevented White House officials from making the claim that Iraq tried to buy uranium in Africa. But the allegation made it into the president's State of the Union and other officials' public remarks. It was only withdrawn this summer.

A former top State Department intelligence official, Greg Thielmann, told CBS News' 60 Minutes II that contrary to what Secretary of State Colin Powell told the United Nations, Iraq didn't pose an imminent threat to anyone: "I think it didn't even constitute an imminent threat to its neighbors at the time we went to war."

Kay said his team had found signs that Iraq maintained capabilities that "could be activated quickly to surge the production of BW agents," but discovered no weapons. Kay said Iraq had plans to produce longer-flying missiles, but he produced no evidence of an active chemical or nuclear weapons program.

The president stressed Kay was still searching for weapons. His final report is not expected until next year.

One possibility Kay is exploring is whether Iraq sent weapons out of the country before the war. A senior military intelligence chief suggested Tuesday that Iraqi officials might have shipped the weapons across frontiers without the knowledge of Saddam Hussein.

James R. Clapper, who heads the National Imagery and Mapping Agency, described his theory as an educated hunch.

Before and during the war, U.S. intelligence tracked a large number of vehicles, mostly civilian trucks, moving from Iraq into Syria, Clapper said. What was in them is unknown, although he suggested they may have contained materiel related to Iraq's weapons programs.

But some other intelligence officials have previously said they have no conclusive evidence of Iraq moving weapons to Syria or elsewhere.

Clapper also suggested that some items from Iraq's weapons programs may have been destroyed or hidden in the run-up to the war. He pointed to the discovery of buried Iraqi fighter jets as evidence that members of Saddam's government sought to hide things from invading U.S. and allied forces.