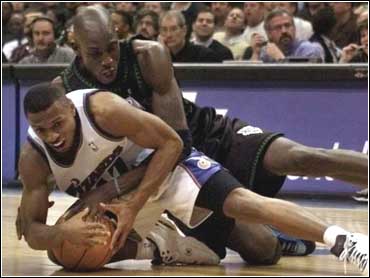 With their new coach bouncing off the bench like a ball of endless energy, the Washington Wizards looked, played and felt like a liberated team.

In Darrell Walker's home debut, the Wizards beat the hottest team in the NBA. Juwan Howard had 14 points, 13 rebounds and seven assists and held his own against Kevin Garnett in Wednesday night's 103-93 victory over the Minnesota Timberwolves.

"Darrell knows what he's doing," said point guard Rod Strickland, who had 15 points and four assists. "He knows his Xs and Os, and he knows how to motivate. He's into the game every minute of the game."

More to the point, Walker is the antithesis of Gar Heard, the old-school, stern-faced coach who didn't get along with his veterans. Heard was fired Saturday by new president of basketball operations Michael Jordan.

"Y'all don't understand how negative it was around here," Strickland said. "Now it's just more positive. People feel good about coming in and playing and practicing and everything."

Walker, whose first game was a close loss Tuesday at Cleveland, punched his fist and leaped off the bench to reflect the fortunes of his team. With Jordan watching intently from the owners' box, the Wizards played with renewed enthusiasm and a new commitment to defense.

"He's making a major difference," said Howard, who played his preferred position of power forward instead of the small forward role he usually had under Heard. "With his schemes, defense comes first, and that's what wins ball games. You can see the energy level from all the players. There are a lot of players that feel rejuvenated, and that's what it's all about. We need to go out there and fun."

The Wizards nearly blew a 14-point, fourth-quarte lead as they went almost seven minutes without a field goal. The lead shrank from 83-69 to 92-89, but solid defense forced two key turnovers bad passes by Garnett and Malik Sealy in the final 90 seconds.

"I told these guys: 'If you want to get your respect back and you want to get some wins, don't fold.' They accepted that and kept playing," Walker said. "They believed in themselves. And that's what I kept telling them. Not me, believe in yourselves."

Washington ended the game with an 11-4 run that included layups by Howard and Mitch Richmond and a 3-pointer by Richmond. Richmond scored 19 points in his return to the lineup after missing seven games with a cracked rib.

Statistically, it was quite an upset. Washington is in last place in the Atlantic Division, while Minnesota lost for only the fifth time in 23 games.

But the Wizards were more fired up.

"We didn't play with enough of an edge tonight to play a good basketball team," Minnesota coach Flip Saunders said. "You can't just go through some motions. We tried to turn it up and got close, and they made some big plays."

The Wizards were leading 70-64 when Saunders rested Garnett for the final three minutes of the third quarter. Washington then went on an 11-3 run to end the period, capped with Richard Hamilton's pump-fake, 3-point leaner at the buzzer to make it 79-67.

Howard dunked over Garnett to increase the lead to 14 early in the fourth, but Garnett then led the comeback to make the game close. He finished with 22 points and 11 rebounds.

Most of the game was simply good basketball from both teams, a rare sight at the MCI Center this season.

The second quarter was almost as fluid. The Wizards were the first team to open any kind of a lead, going on an 8-0 run late in the first half with a pair of power inside moves by Jahidi White and a series of free throws. Washington led 54-49 at the break.