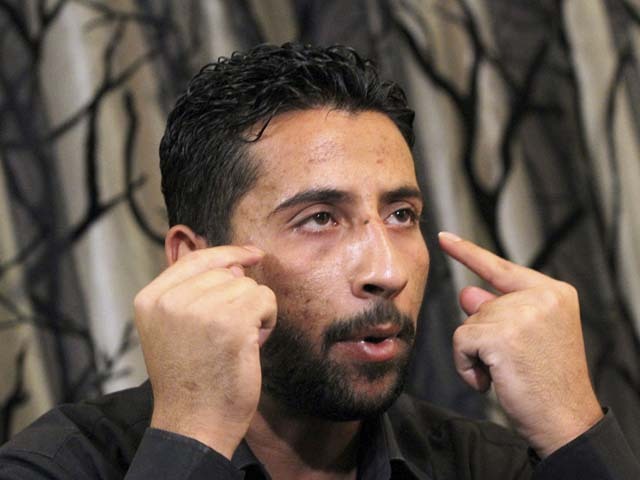 Inside a filthy detention center in Damascus, eight or nine interrogators repeatedly bludgeoned a skinny teenager whose hands were bound and who bore a bullet wound on the left side of his chest. They struck his head, back, feet and genitals until he was left on the floor of a cell, bleeding from his ears and crying out for his mother and father to help him.

Ibrahim Jamal al-Jahamani, a fellow prisoner who said he witnessed the brutal scene in Syria in May, heard the interrogators demand that the 15-year-old proclaim strongman Bashar Assad as his "beloved" president.

The youth, later identified as Tamer Mohammed al-Sharei, refused. Instead, he chanted an often-heard slogan from anti-regime street protests calling for "freedom and the love of God and our country."

Tamer's refusal apparently was the final straw for the interrogators.

"Guards broke his right wrist, beating him with clubs on his hands, which were tied behind his back," al-Jahamani told The Associated Press after his release from detention, referring to the beatings as torture.

"They also beat him on the face, head, back, feet and genitals until he bled from the nose, mouth and ears and fell unconscious," he recalled.

"He pleaded for mercy and yelled: 'Mom, dad, come rescue me!"' al-Jahamani said. "He was lying like a dog on the floor in his underwear, with blood covering his body. But his interrogators had no compassion that they were savagely beating a boy," al-Jahamani added, his voice breaking with emotion.

Tamer and al-Jahamani were two of thousands of Syrians caught up in mass arrests of those suspected of opposing Assad during an uprising that began in March.

Al-Jahamani witnessed the beating from a corridor lined with cells while he was waiting for two hours for the prison guards to take him to his cell. He said the corridor reeked from the stench of blood and dirty toilets and the cell beds were covered in dirty sheets.

At the lockup run by Syria's Air Force Intelligence, security forces kept Tamer bound and nearly naked, his body covered in blood and bruises, while interrogators broke his forearm and teeth.

At one point, a doctor was brought in to revive him, al-Jahamani said.

"He gave him an injection and they started beating him again," concentrating on his feet and genitals, and the boy started bleeding from his ears, al-Jahamani said.

The next day, the teenager's screams abruptly stopped and al-Jahamani said he never heard a sound from him again.

Al-Jahamani, 23, told the AP he was held in the same Damascus detention center as Tamer in May and saw and heard the boy being beaten over two days.

On the first day, al-Jahamani saw a bruised Tamer face down on the floor of the corridor. Later that day, they were placed in different cells near each other on that same corridor, and al-Jahamani could hear Tamer's screams.

The story of Tamer's death while in detention offers a rare, first-hand account of the beatings of young detainees during the nearly 4-month-old uprising. Tamer's case, along with another youth whose body bore signs of brutality, have galvanized thousands of protesters in the face of a brutal crackdown that has killed more than 1,400.

Al-Jahamani spoke to AP reporters by telephone and in person over two days of interviews. He asked that his precise location, somewhere along the Syrian-Jordanian border, not be revealed out of fear of retribution by Syrian secret police.

He said he fled Syria after authorities released him May 31. He spent nearly a month in detention. He showed the AP a copy of his release paper, signed and stamped by Syrian authorities after they failed to find evidence linking him to charges of incitement.

Syria has banned nearly all foreign media and restricted media coverage, making it impossible to verify events independently. But since the early days of the uprising, al-Jahamani has provided reliable witness accounts to the AP that have been confirmed by multiple sources.

Tamer's death became known in June, when blurry cellphone videos showed the teen's bruised and bullet-pocked body, missing most of his teeth, in a wooden coffin. In one clip, a woman cries out: "This is my son! I swear this is my son!"

Al-Jahamani said he saw the video after his release and instantly recognized the dead youth as the teen from the detention center. He had heard interrogators call him "Tamer."

The videos have come to symbolize the brutality of a crackdown that does not even spare children, with at least 72 of them killed in the uprising, according to the Local Coordination Committees, a group that documents protests.

The account of Tamer's beating and death could bolster calls by human rights groups that Syrian forces should be investigated for possible crimes against humanity. This week, London-based Amnesty International urged the U.N. Security Council to refer Syria to the International Criminal Court for such an investigation.

"We'd like to see peaceful demonstrators allowed, and we'd like to see a real dialogue begin," U.S. State Department spokeswoman Victoria Nuland said this week. "We want to see political prisoners released. We want to see repression and torture ending in Syrian jails."

Tamer and another youth, Hamza al-Khatib, 13, both from the southern village of Jiza in Daraa province, disappeared April 29. The province is where the uprising began after security forces arrested high school students who scrawled anti-regime graffiti on a wall.

Hamza was arrested at a demonstration and not seen again until his mutilated body, with his penis severed, was delivered to his family weeks later. He, too, has become a symbol of the revolt against Assad, driving thousands of protesters into the streets.

The deaths of Tamer and Hamza in particular enraged Syrians who have lived under a brutal dictatorship led by the Assad family dynasty for more than four decades. The protests have grown larger and drawn a broader cross section of society every week.

Al-Jahamani said he was walking in Daraa on May 3 with his friend, Firas Nassar, when security forces asked them to stop. Nassar ran and was shot to death instantly by a plainclothes policeman.

"I was traumatized seeing my friend getting shot dead in front of my eyes," he said. "He didn't do anything to be killed."

Al-Jahamani said he wasn't afraid, but he was angry about the death of his friend.

"I had to remain quiet because they may have killed me if I did or said anything," he said.

Al-Jahamani decided not to run.

Security agents handcuffed him, covered his eyes and pushed him into a car where he was driven for more than an hour. He later found out he was being held at the Air Force Intelligence detention center in Damascus.

He said he also was beaten with clubs and kicked by interrogators, leaving marks on his thigh long after his release. It was there that he witnessed Tamer's beating.

"What mistake had he committed?" al-Jahamani asked. "He wanted freedom, he wanted to be like his peers elsewhere, enjoying life, going out without looking over his shoulder."

He said he was arrested at least three times since protests swept Syria in March.

"I was arrested twice in March, once in April, and the one during which I witnessed the torture in May," al-Jahamani said. "They were after me because I was active on Facebook and the Internet, feeding video material and pictures to show the world the brutality of Bashar Assad's regime. I was also in contact with the media, like the AP, outside Syria."

During his three detentions before the one in May, "the authorities used to ask me to remain quiet and not to speak out to anyone. They hacked all my emails and even my page on Facebook and my Twitter account," he said.

Al-Jahamani said he "will not go back to Syria until the regime there is toppled."

"I will return home to a free Syria, free of the tyrant Bashar Assad and his corrupt clique," he said.