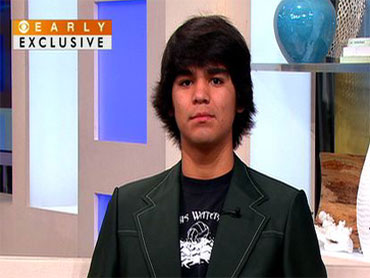 Three beaches in southern California were closed over the weekend after a shark attacked and killed a college student while he was body-boarding near Santa Barbara.

CBS News correspondent Ben Tracy reported on "The Early Show" from Surf Beach, Calif., of of which the attack happened. Tracy said the beaches may re-open today.

The site of Friday's fatal shark attack is now a makeshift memorial for 19-year-old Lucas Ransom. Tracy reported Ransom was just 100 yards from shore and a few feet away from his friend Matthew Garcia when, without warning, he was pulled under.

Sgt. Jason Grossini, of the Santa Barbara County Sheriff's Dept., said of the attack, "The friend was surfing, the victim was boogie-boarding, saw his friend go under for a brief moment, came up, something was wrong, noticed he had been attacked by a shark."

Garcia heard Ransom yell "Help me, dude," then watched as the waves around him turned blood red. The 18-foot shark had ripped Ransom's leg at his pelvis. Garcia pulled his friend to shore, but it was too late. He died at the scene.

Garcia said on "The Early Show" the attack was worse than a horror movie.

"It (was) just like a ninja came through and just took him under water kind of," he said. "I mean, it was very stealth-like. You would never think anything was wrong. It was very placid and calm. Even he said it was kind of eerie it was so perfect today. And just out of nowhere, like people refer to great whites as the man in the gray suit, and that's kind of exactly what it was. It was just kind of in and out of the water, real smooth, real majestic and was quite fast."

He continued, "Right when it happened, I knew that it wasn't going to turn out well. I knew right then. But right after I'd seen him, it was kind of like, it was an eerie sight."

Garcia added, "…The wave was completely red and he was at the top of the wave."

Ransom and Garcia were friends since high school and were college roommates for the past three years. Garcia said Ransom should be remembered as "larger than life."

He said, "We shouldn't be sad about his death. Yes, it is tragic, but we should celebrate his life and celebrate what he meant to everyone around him. And how he made everyone just feel amazing all the time."

Other friends are shocked that this happened to Ransom, a former lifeguard and competitive swimmer.

Jeffrey Rupert, a friend of Ransom's, said, "Great lifeguard. Great friend. And I was, yeah, it was heartbreaking to hear."

Tracy showed Ransom's body board. A 13-inch chunk is gone, bitten off by the shark. Authorities are trying to determine which kind of shark attacked Ransom. Experts say, based on the injury and the shark's behavior, it is most likely a great white that may have mistaken ransom for a seal.

Garcia said on "The Early Show" the shark may have been a great white.

Great white sharks are often portrayed as some of nature's fiercest predators. Weighing up to 5,000 pounds, they are known to strike without warning. But, Tracy reported, their attacks are rare. In the past 90 years, there have been just 91 attacks in California, with 13 of them ending in death.

Shark expert Allison Trimble told CBS News, "In my experience sharks are picky eaters, rather than monsters that want to chomp on everything. Humans are not part of their natural diet."

Tracy added several shark warnings have been issued up and down the California coast this year after great white sharks have been spotted. This particular shark could be long gone as they can travel up to 59 miles per da-

A fund has been set up in Luke's memory. Donations can be made to
Admin@KeepLukeAlive.com.