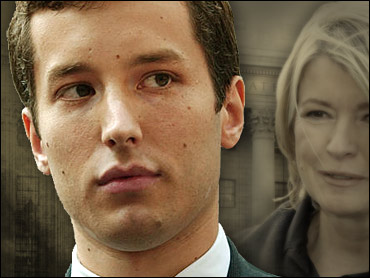 The government's star witness against Martha Stewart said the domestic diva told him to sell her shares of ImClone after being told company founder Sam Waksal was dumping his shares.

Douglas Faneuil, under questioning from the prosecution, told the jury about a phone call he received from Stewart on Dec. 27, 2001. Faneuil said he told her that ImClone founder Sam Waksal was trying to sell all his shares of the stock -- and she ordered him to do the same with hers.

"Hi, this is Martha," Stewart begin the conversation, Faneuil said. He said he advised her that she "might want to act on the information that Sam's selling all of his shares."

"All of his shares?" Stewart reportedly replied.

"What he does have here, he's trying to sell," Faneuil testified that he answered. According to Faneuil, Stewart then told him to sell all her shares at market price — contradicting her story that there was a standing order to sell the stock when it hit $60 a share.

Faneuil also admitted Wednesday that he had recreationally used marijuana and experimented with Ecstasy while working at Merrill Lynch & Co.

In questioning done without the jury present, Faneuil said he smoked marijuana with friends "about once a month." He also acknowledged using the club drug Ecstasy two or three times.

"It intensifies your tactile sensations and emotions," he said of the latter drug. He testified under questioning from Stewart attorney Robert Morvillo, who was expected to raise the drug issue during his cross-examination.

U.S. District Judge Miriam Goldman Cedarbaum said she would restrict Morvillo's questioning in front of the jury, but did not elaborate.

Faneuil was questioned before he resumed direct testimony in the case against Stewart.

It's not the first problem with Faneuil's credibility: Faneuil had initially supported Bacanovic and Stewart's story, but changed his story in a 2002 plea deal with prosecutors.

Prosecutors sought to blunt that argument as soon as Faneuil took the stand Tuesday. Seymour asked him whether he had ever committed a crime.

"I told one client about what another client was doing in his account," Faneuil said, "and then lied about it to cover it up."

"Prosecutors told jurors in opening statements that Faneuil is an 'admitted criminal' so clearly they are not trying to hide the fact that he initially lied about the stock trade that generated this case," said CBSNews.com Legal Analyst Andrew Cohen.

On Tuesday, the former brokerage assistant testified that broker Peter Bacanovic made it clear he wanted a stock tip passed to Stewart by blurting: "Oh, my God, get Martha on the phone."

The tip: ImClone Systems founder Sam Waksal and his family were frantically trying to unload their shares of ImClone stock. Waksal later admitted he had insider knowledge of coming bad news that would send the stock tumbling.

Faneuil told jurors of a hectic morning at Merrill on Dec. 27, 2001, with Waksal's accountant and Waksal's two daughters barking sell orders at him in just the first hour of the day.

When Faneuil told Bacanovic, on vacation in Florida, of the selling, Bacanovic tried to reach Stewart but could not, Faneuil testified. He said Bacanovic then told him to tell Stewart what was going on.

Faneuil said he asked Bacanovic if that meant directly telling Stewart that the Waksals were selling their shares. He said the broker answered: "Of course. You must. You've got to. That's the whole point."

Prosecutors are hitching their case on Faneuil, just 28, hoping they will believe the tip led Stewart and Bacanovic to tell a string of lies to prosecutors about why Stewart sold the stock.

Bacanovic and Stewart claim they had decided in the days before Dec. 27 to sell Stewart's 3,928 shares of ImClone when the stock fell to $60 per share. Stewart is also accused of deceiving her own investors about the investigation.

Sam Waksal, a former jet-setting New York socialite, is serving a seven-year prison sentence after admitting he instructed his family to sell ImClone shares when he got word the government was about to reject ImClone's new cancer drug.

On Dec. 27, daughter Aliza Waksal sold all her shares — placing the order through Faneuil. Waksal's accountant tried to order Faneuil to sell Sam Waksal's shares as well, but Faneuil said he told the accountant it would be against the rules.