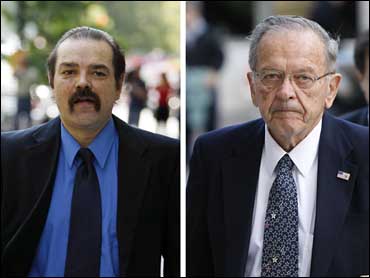 One of the government's witnesses against convicted Sen. Ted Stevens of Alaska says he didn't tell the truth on the stand about an immunity deal with the Justice Department in exchange for his testimony. But federal prosecutors said Friday that his current story is the false one.

"I testified to the fact that there was never immunity for me or my family and friends," welder David Anderson said in a November letter to a federal judge placed in court files by Stevens' lawyers. "That is simply not true."

The Justice Department responded quickly, saying the government never made any agreement of immunity for Anderson or any of his family or friends.

"Mr. Anderson's statement in his November 2008 letter is not true, and the court is aware that it is not true," government lawyers said.

Stevens' lawyers have asked U.S. District Judge Emmet Sullivan to hold a hearing on Anderson's charges and to let them investigate it. It was not immediately known when Sullivan would make a ruling.

Stevens, 85 and the Senate's longest-serving Republican, was convicted on seven felony counts of lying on Senate financial disclosure documents to hide hundreds of thousands of dollars in gifts and home renovations from millionaire businessman and VECO founder Bill Allen, who is Anderson's uncle.

The senator, who won't be sentenced until early 2009, has said he will appeal the conviction. He lost his Senate seat to Democratic challenger Mark Begich in the November election.

Stevens gave his farewell speech to the Senate on Thursday, telling his colleagues: "I look only forward and I still see the day when I can remove the cloud that currently surrounds me."

Anderson supervised the start of the 2000 renovation of Stevens' Girdwood, Alaska, home and later responded to maintenance requests by Stevens and his wife. He testified at the trial that a March 2008 affidavit he signed that would give immunity to his family and friends in exchange for his testimony was false.

"That was never said," Anderson testified on Oct. 9. "It was kind of a gentleman's agreement, you know."

In his letter, Anderson said: "The agreement was that if I cooperated my entire family would be safe from the investigation(s) of the Department of Justice and also the Treasury Department. The Department of Justice has never ever denied that they shook my hand on this agreement but instructed me on how to sugar coat it and get it swept under the rug during the trial as they have told the court just the opposite."

But the Justice Department said Anderson told two FBI agents in an August 13 meeting that he knew there was no immunity agreement and that the March affidavit was false.

The government agreed not to make him testify against family members, but "Anderson knew that there had been no agreement relative to immunity or promises of immunity by the government as to anyone," the Justice Department said.

Anderson also said he was given extensive help by the prosecutors in remembering events surrounding the renovation of Stevens' house.

"Without the preparation from the prosecution and reminders from them about my activities and the agreement I had with them about my family and myself I would not have given the same testimony," Anderson said. "Without a shadow of a doubt I believe this trial would have gone much differently."

Federal prosecutors say this is also untrue and they will submit documents and video evidence Monday "that prove the falsity of Mr. Anderson's allegations."
By Associated Press Writer Jesse J. Holland