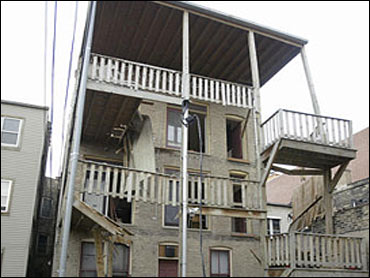 It was the first really warm summer night in Chicago's Lincoln Park, and a group of kids, most just out of college, were looking to make the most of it.

The bars and restaurants were packed, and if you weren't out on the town, then you were likely to be partying out on the back porch of one of thousands of old row homes or apartment buildings in the area.
On June 29, 2003, there was only one party to be at – a two-story bash thrown by a group of young professionals who lived there.

"It was a good atmosphere," recalls pediatric nurse Katie Main. "There was a really great group of people."

But in less than 10 seconds, the carefree party would turn into chaos -- and 13 people wouldn't get out alive. Correspondent Maureen Maher reports on this story that first aired last December.

"Everybody was just out having a good time. It was kids seeing each other for the first time over summer," says Northern Illinois University football player Pat Raleigh, who was at the party.

"Everybody was really friendly. Everybody was smiling," says college student John Koranda, who was invited by his big brother, Rob, one of the party hosts.

Sisters Ingrid and Katie Sheriff had planned to go out together that night. But Ingrid couldn't make it, so Katie went with other friends. The invitation promised a "Double Decker" evening.

"It was a huge porch," says Raleigh and fellow football player Brad Cieslak. "It looked like it was newly built. It looked sturdy."

But it wasn't. Within seconds, one deck, packed with dozens of partygoers, collapsed onto another crowded deck, plunging as many as 100 people into a basement pit.

"There was no warning," says Koranda. "You just fell … Somehow I fell all the way to the bottom, and my shoulder was on the basement floor."

Chicago special rescue unit firefighter Billy Lanham was first on the scene: "My first impression was, 'Oh, my God!' … We've got a big problem here."

Cieslack says the porch collapsed just half a minute after he walked inside from the porch: "Helping me the best with that is not thinking about it."

Mugler fell two floors and landed on top of the pile: "The screams came, just screams of terror, [I thought] just get off this pile, because there were people beneath me … You couldn't see faces. You could just see hands trying to reach out and push whatever off them … Just grabbing for anything and just yelling for help, yelling for help."

Koranda says he was buried alive underneath the pile: "I was laying on my side and I couldn't move anything. All I could move was my hand, my left hand, which I tried to put on my mouth 'cause I was just thinking that if something else falls … I can have a pocket to breathe."

Raleigh and Cieslak ran downstairs and around the back. "People were covered up in boards. It looked like a bad nightmare," says Raleigh.

"Pat got there before me - and he was already pulling stuff out - and then I jumped in and we were all just pulling as many boards out as possible," adds Cieslak.

Still missing was their friend and teammate, 19-year-old Shea Fitzgerald.

Main, a nurse, immediately went to work: "I grabbed two people I didn't even know to help me carry the cooler of ice and some blankets. I just knew that I'm a nurse, here we go, I can help."

As Main helped the some victims, many others, including Koranda, were still trapped in the massive pile of rubble.

"I was thinking about my brother the whole time," says Koranda. "All it was was suffering, pain and death. I can see it, I can hear it and smell it and definitely even taste it."

Ingrid Sheriff was visiting her father in Milwaukee when she first heard the news. She wondered if it was the same party her sister Katie had wanted her to go to the night before.

"The first thing I did was pick up my cell phone and call her [Katie]," says Sheriff.

By morning, it became clear. A carefree porch party had collapsed into a killing field. Fifty-seven people were injured; 13 died in the collapse.

"They're all gone. You just would never expect something like that to happen, ever," says Main, who knows she's lucky to have escaped unharmed. "I was on the second balcony the whole time. And I went inside, like, 10 minutes before it fell."

"I knew I was on the bottom because I could feel my shoulder. So I just tried to relax and breathe," says Koranda, who had fallen three stories and had been trapped under a mountain of debris. "You couldn't move."

After nearly an hour under the pile, Koranda was finally pulled by rescuers from the wreckage. Miraculously, he had only a few cuts and bruises. But that's when his luck ran out. After the accident, no on had seen or heard from Koranda's brother, Rob.

"I was actually in the car on the way home. Family friends were driving me, and they were making phone calls constantly. We were just leaving the city when they found out," recalls Koranda, who discovered that his 23-year-old brother had died in the collapse. "He was easily my best friend, without question."

The sheer senselessness of her son's death haunts Sue Koranda: "I have a difficult time understanding how your life gets taken away like that."

Ingrid Sheriff also spent the morning trying to find her sister, Katie: "We called an emergency line, they didn't have anyone by her description, so we knew she hadn't been admitted to any of the hospitals."

Then, she got a call from the medical examiner's office, and found out that her 23-year-old sister, Katie, was dead.

College football players Cieslak and Raleigh lost Fitzgerald, their teammate. He died in the basement, under the pile.

"He was somebody to model yourself after. He was the type of person you wanted to be like," says Cieslak.

But what made this all the more tragic was that Chicago's fire chief quickly announced that all these bright, young kids could have been responsible for their own deaths: "It appears to be a case of too many people in a small space."

"I have no indication of any substandard problems or insufficiencies with the porch at this time," says Norma Reyes, the city's building commissioner. "The buildings are not made for large assemblies and parties."

But a more thorough city inspection discovered that the porch was riddled with building code violations. In fact, a 48 Hours investigation found that those defects dangerously weakened the whole porch structure.

48 Hours also learned that all the porch's floor beams were made with undersized lengths of wood, and the screws that ripped out of the wall during the collapse were shorter than they should have been.

"This occurrence was 100 percent preventable," says Ken Koranda, John and Rob's father. He adds that the size of the party wasn't the problem. "If the porch was properly constructed, these porches would have held double the amount of people that were there."

"It was built in a reckless fashion, that showed the lack of caring for the safety of the people that would be on this porch," says lawyer David Kupets, who represents one of the accident victims.

How much weight should each deck have been able to hold?

Plus, the porch was built illegally without a building permit. As a result, it was 50 percent bigger than allowed.

Phillip Pappas owns the building where the porch collapsed. After the accident, the city of Chicago sued Pappas, claiming 21 of his buildings had potentially dangerous porches.

But, in documents his lawyer sent to 48 Hours, it appears Pappas still blames overcrowding. In addition, Pappas cites a police report where two unnamed victims told a paramedic they saw young people jumping up and down on the deck just before the collapse – but neither of those witnesses has yet to come forward.

For instance, Pappas' rental agent failed to mention was that one porch we were standing on had also been cited for serious code violations – and, according to the city, was in danger of collapsing at any time.

The weeks and months since the accident have seen funerals and memorials.

"People say God has a bigger plan for you – but that makes you wonder because all of these people that were killed, were amazing," says Katie Main. "I don't think it's something that you ever move past. It's affected me. You look at life differently."

The Koranda family is focusing on the future. They and 26 other families
have sued Pappas and the city of Chicago, fighting to prove an unsafe deck – not a overcrowded party – caused the deadliest porch accident in U.S. history.

"If today, our family can somehow make a change and make a difference so this won't happen to other young adults -- to anyone," says Sue Koranda, who says the family will fight on in memory of their son. "Rob always thought of his fellow man and their welfare, and that's our responsibility now -- to carry on his legacy."

The city of Chicago has no plans to file any criminal charges against landlord Phillip Pappas. Since 48 Hours first aired this broadcast in December, Pappas has started paying $108,000 in fines for building code violations.

And according to city officials, Pappas has made "dramatic improvements to 21 other unsafe porches. Pappas has rebuilt the porch that collapsed, this time using metal."