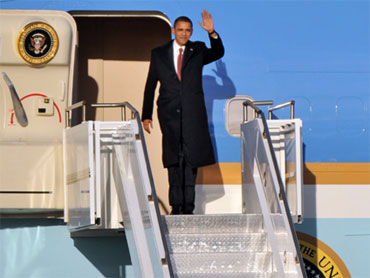 (AP Photo/Michael Dinneen)
If President Obama has one of those wall maps where he sticks a flag pin in every state he's visited, he planted the 50th yesterday.

"I have to tell you I'm also really excited because I had up until today visited 49 states. So this is officially my 50th state," he told military personnel at Elmendorf Air Force Base in Alaska, a refueling stop on his way to Japan.

His self-proclaimed tally is clearly the result of a lifetime geographic accomplishment that includes his two years of extensive travel as a presidential candidate. But as president, he still has a ways to go before he can put a flag pin in every state.

Our CBS News scorecard shows that since taking office, Mr. Obama has been to 28 states (see list below). That reflects the 39 domestic trips he's taken since his Inauguration. It's a lot, but it's not a record.

During George W. Bush's first year as president, he visited 39 states. It took him the remaining seven years to bring his count to 49. But he never planted a flag pin in Vermont, perhaps understandably. It was a state in which 40 towns and the State Senate voted to impeach him and Vice President Cheney.

Pres. Bill Clinton was impeached, though not convicted, and he managed to visit all 50 states during his eight years in office. But he only hit #50 a month and a couple weeks before the end of his two terms by visiting Nebraska in December 2000.

George H. W. Bush hit all 50 statements in his one term as president.

List of 28 States Visited By President Obama
(in chronological order):