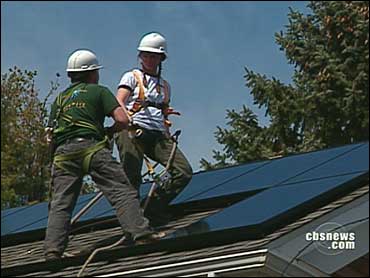 The massive economic stimulus bill signed in February makes a big push for alternative energy. It includes $20 billion in federal tax credits - and big chunk of those are devoted to subsidizing green projects, as CBS News correspondent Michelle Miller reports.

When oil prices spiked last year, Tom and Jane Varian started thinking about making their home in Black Creek, N.Y. more energy efficient. But it took the government's new stimulus plan - including a 30 percent tax credit - to get them to take the plunge.

They're having their roof surveyed for solar-electric panels, and are about to dig two 500-foot wells for a geothermal heating and cooling system.

"We expect to see a 75 percent reduction in our power bill as well as our yearly oil bill," Tom Varian said.

The upfront costs aren't cheap. The Varians will pay roughly $98,000 for their green technology, but a New York state rebate and tax credit will slash their bill by $23,000. Subtract another $24,000 in new federal tax credits and their total cost comes to just $51,000 - about half the market price.

So how long will it take to get their money back out.

"Between six to eight years," Jane Varian said. "But as long as we see a return by year ten i think we'll be satisfied."

There are plenty of reasons for getting off the grid - economic, environmental, and the kick of never having to pay a utility bill again. Being self-sustaining.

Jim Irish is converting the Varians' home. Drawing on 15 years with General Electric as an engineer, after 9/11 he poured his expertise into helping the U.S. become less dependent on foreign oil.

"I watched all that happen and I thought that the world was going to change when it came to energy," said Irish, who called his company Hudson Valley Clean Energy.

The federal government has also changed.

Under the Bush administration, homeowners could get a tax credit of 10 percent up to $2,000 for installing renewable energy systems and $500 for making energy efficient upgrades, like new windows. Under the new rules, renewable energy improvements are subsidized up to 30 percent - with no cap - and homeowners get another $1,500 for energy-saving upgrades.

The Varians expect to save at least $6,000 on utilities the first year.

"There's very little risk.to the cash flow stream from a solar system," Irish said. "Basically it will only go down if energy prices go down, or if the sun stops shining."

And if that happens, we've got bigger things to worry about.

But with no guarantee how long the government will be able to subsidize these deals, this golden - or green - opportunity may not last forever.