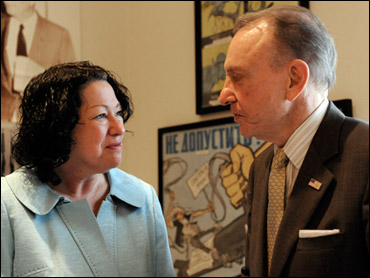 (AP Photo/Susan Walsh)
While the White House has insisted President Obama's Supreme Court nominee Sonia Sotomayor simply chose her words poorly when she said in a 2001 speech that a "wise Latina woman" would make "better" judicial decisions than a white male, records of her past show that her language on the subject has been consistent throughout the years.

The White House on Thursday turned in boxes of Sotomayor's speeches and other materials, along with a 172-page questionnaire she filled out, to the Senate. The documentation of the judge's remarks may prolong the debate over her take on "identity politics." Sotomayor made a number of similar statements to her now well-known comment from a 2001 commencement speech between 1994 and 2003, Congressional Quarterly reports.

Some senators have said this week they are still questioning Sotomayor's judicial approach to race, even as some of her strongest detractors have backed down from their harshest criticisms of her.

After meeting with Sotomayor on Thursday, Sen. John Cornyn (R-Texas) said he hopes to hold respectful confirmation hearings for her, though he could not rule out a filibuster of her nomination, according to the Dallas Morning News.

"My own view is that I hope that will not be necessary, but we won't know that until we get farther into the process," he said.

Cornyn told the Dallas Morning News he was still concerned with her "wise Latina" comments, as well as her 2008 ruling against a group of white firefighters from New Haven, Conn. who were denied a promotion.

"That begins to concern me and that raises legitimate concerns about identity politics and whether justice is truly colorblind, or whether people really do believe that judges – based on their sex or ethnicity or their race – can render better decisions than others," Cornyn said. "There will be more questions about that."

Concerns about Sotomayor's comments are coming from the left side of the aisle as well. Senate Majority Leader Harry Reid (D-Nev.) on Thursday said he "dared" any of his fellow Democrats to vote against Sotomayor's nomination, Roll Call reported; moderate Sen. Ben Nelson (D-Neb.) recently said her comments are "troubling."

"What I want to do is have her explain to me what she meant by that and give her an opportunity to satisfy me that she doesn't intend to take an agenda to the bench," Nelson said.