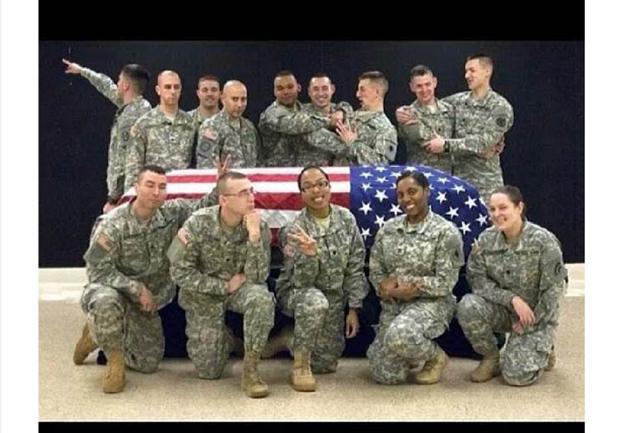 MILWAUKEE -- A group photograph showing soldiers clowning around an empty, flag-draped casket has sparked a furor on social media where people say it's disrespectful of veterans and those killed in action.

The Wisconsin National Guard responded Tuesday by announcing that it had suspended the soldier who apparently posted the photograph online from her honor guard duties. The photograph was taken at a guard training facility in Arkansas and included soldiers from other units.

The National Guard also was taking steps to protect the soldier after she received death threats.

The photograph originally posted on Instagram shows about a dozen soldiers around a casket. Several hug playfully. One flashes a peace sign. Another has his back turned and is pointing off in the distance.

The caption reads, "We put the FUN in funeral -- your fearless honor guard from various states."

The photograph was posted from an account belonging to Spc. Terry Harrison, of the Madison, Wisconsin-based 1st Battalion, 147th Aviation Regiment, according to the National Guard. That account has since been closed, but others have reposted the picture and Harrison's comments on multiple social media sites.

Judy Vincent, of Oklahoma, said she saw the picture when a friend reposted it on Facebook.

"It was like somebody slapped me in the face. I've never in my life seen such disrespect for the fallen or the families," said Vincent, whose son died in Iraq in 2004.

Marine Cpl. Scott Vincent was killed near Fallujah by a suicide bomber. His mother said Vincent's friends served as his honor guard and she has no doubt that he was treated with respect. But she knows the photograph has raised doubts among other families.

"It raises questions in your mind," Judy Vincent said. "What did they think of me and was my loved one treated with disrespect?"

Vincent was among the more than 900 people to post comments on the Wisconsin National Guard's Facebook page, most of them asking for Harrison and the other soldiers to be disciplined.

Harrison, a full-time member of the National Guard, has been suspended from Wisconsin's honor guard and assigned to other duties, said Maj. Paul Rickert, the Wisconsin National Guard's director of public affairs.

The Wisconsin National Guard is conducting an investigation of the picture, CBS affiliate WDJT reports.

Attempts to reach Harrison by phone and email were unsuccessful. The National Guard has taken steps to protect her after she received death threats through social media and other means, Rickert said.