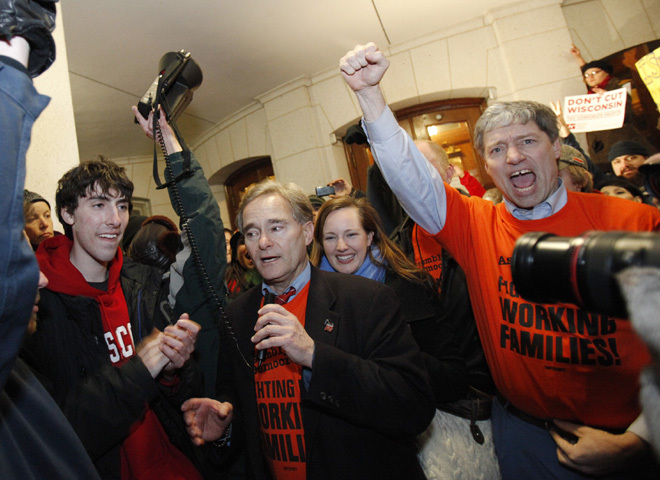 Sen. Tim Cullen, a Janesville Democrat, tells The Associated Press that talks with Republicans broke down on Thursday.

He says it's difficult for either side to compromise: If the Democrats back down, their base won't forgive them, and Walker can't give up anything because he'd be seen as weak.

Plus, Assembly Republicans have already passed the bill with no changes, making things tougher for Walker.

Cullen said the lines of communications between the parties remain open, however.

Meanwhile, folk music legend Pete Seeger, who has been singing about union rights since the 1940s, told The Associated Press he's pulling for the demonstrators in Wisconsin who want to stop a bill taking away collective bargaining rights from public workers.

"Maybe the Republican governor, he's done us a favor by bringing the problem to national attention," the 91-year-old Seeger said in a telephone interview from his New York home. "It shows the whole country how much we need unions. We may end up thanking him."

Gov. Scott Walker's proposal would remove the right of public workers to collectively bargain, except over salary increases no larger than the rate of inflation. Most police and firefighters are exempt. The bill is stalled in the Legislature after 14 Senate Democrats fled the state to prevent a vote.

"Without collective bargaining rights we'd be right back to primitive times," Seeger said. "The average American, I think, looks upon unions as a standard way of doing business. Just like you pay rent, you pay taxes, you also get paid a decent wage because of unions. It's not because of the generosity of the employer."

Walker argues that taking away collective bargaining rights, along with forcing public workers to pay more for benefits, is needed to help Wisconsin balance a $3.6 billion budget shortfall. He says private workers have been making concessions for years in the recession so it's only fair for public workers to take a cut as well.

Unions have agreed to the benefit concessions as long as they retain their bargaining rights, but Walker has been unwilling to compromise.

A New York Times-CBS poll this week indicated that Americans oppose efforts to weaken the collective bargaining rights of public employee unions by nearly a 2-1 margin.

Seeger, who has sung at thousands of rallies including one this week at a union hall near his home, said he is heartened by the number of people protesting in Madison.