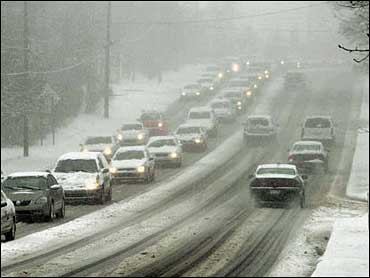 Severe winter weather often poses a dangerous risk to drivers. According to the National Highway Traffic Safety Administration, you are 36 percent more likely to be in a car accident in January than July.

A popular belief is that drivers need to keep up with the flow of traffic. Is this correct?

This is not the best advice. There are a lot of "cowboys" out there on the road during snowstorms, driving SUVs, thinking they're invincible to accidents in these conditions. People think they have power in snow and ice conditions, and you want to stay away from them on the road. Let them pass you.

SUVs have a high center of gravity and relatively short and narrow wheel base and they're prone to rolling over even when the weather is good. If you go sideways sliding around ice and snow and hit an imperfection in the snow, you're going to go over.

Unfortunately, a lot of people who drive SUVs think they have such a measure of protection that they don't wear their seat belt, and that compounds the problem.

Four-wheel gets you going, but doesn't help you stop any better.

Stay at a speed where you feel most comfortable. Remember, speed limits are for ideal conditions and it can take a vehicle nine times longer to come to a stop in wintry conditions, so keep a safe distance between you and the cars in front of you.

How about the common perception that the lower the tire pressure, the better traction the vehicle will have. Is this true?

Well, you might get better traction, but the negative effects of lower air pressure are far worse than just getting bad traction, and you're not guaranteed good traction with lower air pressure. There's significant flexing where the rubber meets the road and it can cause your tire to blow out. It's really important to keep your tires properly inflated. An even better thing to do is to put a dedicated radial snow tire on all four corners of the car. Snow tires are made from rubber compounds that are designed to stay flexible in the cold; normal year-round tires may be flexible in summer, but become like hardened plastic in the cold.

Tire pressure is critical. You should be checking once a week, ideally, and minimally once a month. Frequent and wide temperature swings can make a huge difference in tire pressure; you could be losing or have lost nine to twelve 9 to 12 pounds per square inch. So you really need to monitor the pressure.

We've heard so many theories about what to do if you hit a patch of ice and begin to skid. What is the proper way to get through it safely?

Most skids are caused by excessive speed in a turn: If you've gone into a turn too hard, the car begins to skid because it loses traction. In the past, we've been told to steer in the direction of the skid, but that advice was dispensed when vehicles were rear-wheel drive. Many now are front-wheel drive, so the new thinking is to look in the direction that you want to go in and steer in that direction. We are creatures of our eyes, so when you lose control, just keep focused on where you want to go; don't look at walls or other cars, because you will crash into them.

Anti-lock brakes will enable wheels to keep turning and enable you to maintain control of steering -- just keep your foot on the gas. If you don't have anti-lock brakes, use the threshold braking technique: step on the brakes, sort of like pumping: pump, look and steer. Even on sheer ice, there is still a measure of traction available and if you take advantage of that, you should be able to get around it.

Let's say your car breaks down during a snowstorm. A common belief is to hop out and seek help. Would you recommend braving the elements to find help?

Generally, we recommend that you stay with your vehicle, but that all depends on where you've broken down. If you're broken down in the middle of a traffic lane, you need to get out of the vehicle because there's a good chance another car will hit you from behind. Also, stay a fair distance ahead of where your stopped vehicle is: You don't want someone hitting your car and it then hitting you because you're standing directly in front of it. If you can get the car out of traffic and onto the side of the road safely, stay with your vehicle and prepare yourself ahead of time for this situation.

What should drivers do if they get caught in this situation?

The most effective tool to have in order to get the attention of other vehicles or the police is a set of reflectorized triangles, preferably three of them arranged to form a channel away from the broken-down car. Other tools to have: flares, a blanket, and a cell phone. Turning on emergency flashers might not be best idea in blinding snow or fog. These flashes act like a target to other drivers and they'll tend to go toward them, thinking they may be an exit sign, etc.

If you find yourself stuck due to ice and snow, how should you try to get the wheels to stop spinning? Is salt the best remedy?

No. You need an abrasive, non-clumping substance like kitty litter or sand. You should have a small supply in your trunk for these types of situations. Also it's best to carry with you a small spade or shovel to help clear away some of that snow and ice. And make sure the tailpipe is clear of any snow before driving after a big storm. The fumes can back up and carbon monoxide is an insidious quick killer.

How about the idea of keeping extra weight in your vehicle during the winter months. What's the reasoning behind that?

Most cars these days are either front-wheel drive or rear-wheel drive, so that advice wouldn't help you at all. That extra weight on the non-driving wheels might work against you, because it may make you more inclined to lose control of the vehicle.