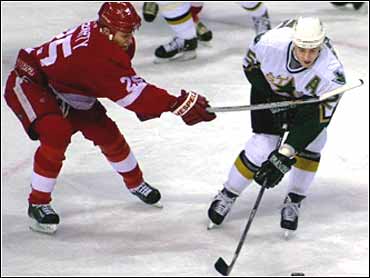 The Detroit Red Wings knew Ed Belfour was going to be very excited, probably too excited, for his first game back in goal following a bizarre week.

So they made those emotions work against him and the Dallas Stars.

Sergei Fedorov caught Belfour out of position for an early power-play goal and Martin Lapointe added another with a man advantage as the NHL's best special teams unit pulled out a 3-2 victory Friday night.

"We wanted to get him going," said LaPointe, whose long rivalry with the goalie was rekindled with Belfour chucking him in the back just before his goal and a shouting match later. "We knew we wanted to stay in front of him. It doesn't take too much to get him revved up and get him off his game."

Belfour last played in a 4-2 loss at Detroit. Prior to the next game, which he wasn't scheduled to play, Belfour argued with coach Ken Hitchcock, then flew home to Dallas from Boston. He was suspended for the next two days, costing him about $134,000, and missed three games. Backup Marty Turco won all three.

Dallas fans didn't seem to care. They gave Belfour the loudest pregame ovation and there were several "Welcome Back Eddie" signs, including one held against the glass by a young girl during warmups.

The Reunion Arena crowd did not boo when his early mistake put Detroit ahead 1-0, and they roared "Ed-die! Ed-die!" during a flurry of saves early in the third period.

"I had a few butterflies at the beginning of the game, but I seemed to settle down as I went on," said Belfour, who made 25 stop. "It's time to move on. I've learned from it. It's been a tough week. But there have been also a lot of good things behind the scenes."

Detroit, which had a streak of six straight games with a power-play goal ended Tuesday night by Phoenix, cashed in on its first two tries to give it 45 in 46 games. The Red Wings' penalty kill was perfect on five tries as Detroit won its third straight in Dallas.

Chris Osgood made 21 saves, including several spectacular ones in the final minutes. He was at his best on Dallas' final power play, stopping a shot by Mike Keane while flat on his back in the crease and his head in the goal.

Detroit's early lead was set up when Belfour roamed far behind his net and blindly swatted the puck to Fedorov. His poor positioning easily set up Fedorov's 21st goal, although Dallas tied it later in the period on a goal by Joe Nieuwendyk.

Belfour said a funny bounce off a cracked board caused him to misplay the puck.

"I know the crack is there, but you just don't know when it's going to happen," he said. "Unfortunately, it happened then."

Brendan Shanahan caught Belfour looking the wrong way on a perfectly executed 2-on-1 with Steve Yzerman to make it 2-1 less than a minute into the second period. The Stars answered 32 seconds later when a shot by Mike Modano went off the skate of Detroit's Mathieu Dandenault and between Osgood's legs.

Later in the second, with Detroit on its second power play, LaPointe redirected a long blast by Nicklas Lidstrom for the game's final goal. LaPointe said the shove in the back from Belfour left the goalie out of position.

Belfour, who is 8-9-1 since ending a shutout streak of more than 220 minutes, stopped the Red Wings on a double minor later in the period and began to get on a roll. His play during a third-period power play inspired the night's first chant of his name, something the goalie-loving crowd usually does early and often.

"He gave us a real chance to win," Hitchcock said.