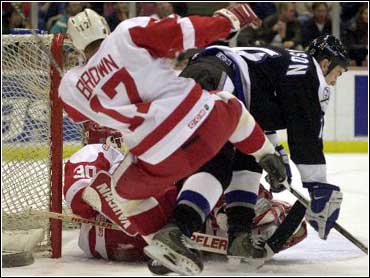 Larry Murphy is in awe of the company he now keeps in the NHL record book.

Murphy moved into third place for games played and Pat Verbeek had two assists to go over 1,000 career points as the Detroit Red Wings beat the Tampa Bay Lightning 3-1 on Sunday night.

The game was Murphy's 1,541st, breaking a tie with Johnny Bucyk for third place on the NHL career list. Red Wings Hall of Famers Gordie Howe and Alex Delvecchio rank first and second with 1,767 and 1,549 games played.

"When I was a kid, those guys were my idols," Murphy said. "To be mentioned in the same sentence with them is unbelievable."

Murphy, who turns 39 on March 8, is in his 20th season. Last year he passed Tim Horton for most games by a defenseman.

"It's one of those things where you're just fortunate to play in the league this long and the numbers add up," Murphy said. "It's still a big surprise to me to play this long. It doesn't seem that long ago I started, and now we're talking about this."

Murphy, who has played for six teams, has no idea how long he'll keep going.

"It's year to year," he said. "Obviously, the end is out there somewhere."

Steve Yzerman, Kris Draper and Brent Gilchrist scored for the Red Wings, who are within three points of first-place St. Louis in the Central Division. Detroit has won two straight and three of four after losing three of four.

Mike Sillinger scored the lone goal for the Lightning, whose season-best three-game winning streak was snapped.

Verbeek became the 57th player to reach 1,000 caeer points when he assisted on Yzerman's goal just 40 seconds in. He also assisted on Draper's first-period tally.

"I guess if I would've thought about that back when I was a kid trying to make the pros I never thought I'd accomplish this," said Verbeek. "My parents taught me to never stop working and always work hard. That got me over a lot of hurdles to get here."

But gaining ground on St. Louis, which lost 4-1 to Chicago earlier Sunday, was more satisfying to the Red Wings than personal milestones.

"We're reading the standings as much as anyone else," Verbeek said. "As well as (the Blues) have been playing, when you have an opportunity to close gound you have to take care of business."

Chris Osgood made 23 saves for his 22nd victory.

Zac Bierk started in the Tampa Bay net, but was lifted after giving up two goals on six shots.

"I should've pulled him after the first," Lightning coach Steve Ludzik said. "That was my mistake."

Yzerman scored off Verbeek's rebound in the game's first minute, then Draper made it 2-0 less than six minutes later with a blast from outside the top of the left circle. Bierk positioned himself so close to the left goal post that Draper's shot easily beat him wide.

"We wanted to stay as close as we could as long as we could," Ludzik said. "Then right off the bat we're down 1-0 in the first minute."

The Lightning got one back on a power play when Sillinger put Steve Guolla's rebound past Osgood at 9:04 of the first.

Gilchrist made it 3-1 when he scored during a goalmouth scramble 9:56 into the second. He shot Verbeek's rebound off the post, but the puck stayed in the crease under Parent and slipped just over the goal line before a defenseman flicked it out.

Referee Don Van Massenhoven originally waved off the goal, but it was upheld by video replay.

Sillinger said the Lightning knew coming in they couldn't fall behind Detroit early.

"They say a two-goal lead's the toughest to protect," Sillinger said. "But against Detroit it's a pretty good bet."