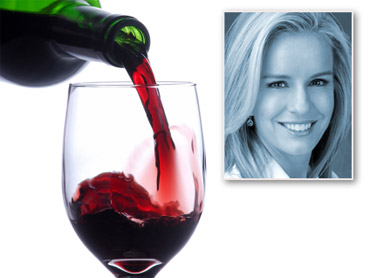 New research suggests women who drink a moderate amount of alcohol on a regular basis, particularly when red wine is the drink of choice, are less likely to experience long-term weight gain than non-drinkers.

The study, conducted by researchers at Boston's Brigham and Women's Hospital, surveyed almost 20,000 women and asked them about their drinking habits over the course of 13 years. The alcohol-free women gained the most weight.

The research, published Monday in the American Medical Association's Special Section: Dr. Jennifer AshtonExperts, however, are quick to remind women that the study does not change documented evidence on the affects of heavy drinking: Consuming more than one or two units of alcohol per day is associated with weight gain.The study, says CBS News Medical Correspondent Dr. Jennifer Ashton, "potentially has some real impact" due to the large number of women involved, the long span over which they were followed, and the reputation of Brigham and Women's Hospital.The women all gained weight, Ashton noted, but the women "who consumed alcohol on a light or moderate basis gained the least, and the women who consumed wine over other forms, like beer and spirits, also gained the least." And men gained more than women.Why might that have been? "The theory is not definitely known," Ashton told "Early Show" co-anchor Maggie Rodriguez, "but one of the ideas is that women tend to substitute alcohol for other potentially high-carbohydrate foods, whereas when men consume alcohol, they're adding those calories on top of what they're normally eating. Also, women tend to metabolize alcohol differently. There are a lot of theories, but no firm evidence yet."The study's authors say the reason alcohol may not be as much of a fat-maker as previously thought may come down to how the human body processes it. It's believed the liver may process alcohol into heat, rather than fat, as it does most other substances.Ashton stressed that four ounces a day of wine -- the equivalent of one alcoholic beverage -- is considered moderate intake. For men, she said, moderate or light alcoholic intake is one to two drinks a day.Catherine Collins, a spokesman for the British Dietetic Association, told The Telegraph wine should not be viewed as a dieting tool.

"If these women have a healthy diet and lifestyle and are having one or two units of alcohol a night, then that has fewer calories than someone who instead has a chocolate bar to unwind," Collins told the newspaper. "It's a question of 'What's your poison?" '

"What this survey shows," Collins added, "is that moderation is key to a healthy lifestyle. People who drink wine may be more likely to snack on sugary and more (calorie-laden) treats."

Ashton pointed out that, "High alcohol consumption has been linked to different types of cancer, liver problems, brain problems, it can weaken the heart muscle. The American Heart Association is very clear: If you don't drink now, don't start for these proposed benefits but if do you, maybe wine is the way to go."