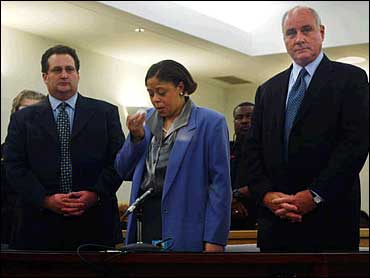 A jury sentenced Chante Mallard to 50 years in prison Friday for leaving an accident victim to die a slow death while lodged in the broken windshield of her car.

After about 2½ hours of deliberations, jurors sentenced Mallard to 50 years for murder and 10 years for tampering with evidence by burning a bloody car seat. She pleaded guilty to the tampering charge before her trial began Monday.

Mallard, 27, could have received anything from five years probation to life in prison for murdering Gregory Biggs.

"There's no winners in a case like this," Biggs' son, Brandon, said in court after the sentence was read.

Earlier, Brandon Biggs did not ask jurors for a particular sentence but told them he'd never get the chance to share important milestones with his father.

It took jurors less than an hour Thursday to convict Mallard, who after a night of drinking and using drugs struck Biggs, 37, while he walked along a highway about 3 a.m. on Oct. 26, 2001. She drove home with the man crumpled in the windshield and left him in her garage to die.

Medical experts testified that Biggs was alive for one or two hours after being hit and probably would have survived had he received medical treatment.

Mallard tearfully told the jury Thursday that she was sorry, adding that she didn't call for help because she was scared and didn't know what to do. But prosecutor Richard Alpert said Friday that the case "is all about selfishness."

"Some people lack the moral fiber to do the right thing," he said. "A man is laying in her car moaning and bleeding and she needs someone to tell her what to do? Any decent person would call for help."

Throughout the trial, defense attorney Jeff Kearney argued that Mallard was guilty of a lesser charge, failing to stop and render aid — not murder.

Mallard, 27, testified Thursday during the punishment phase of her trial, hours after she was convicted. She tearfully recounted driving home after a night of drinking and drugs when she was suddenly hit in the face with flying glass.

She soon realized she had hit a man, whose head and torso were in the car and whose leg was sticking through the jagged windshield. She got out, touched his leg, then got back in and drove home where she parked in her garage.

Mallard said she heard the man moan and knew he was alive, but never called for help. She was too afraid she'd be arrested, she said.

"I was asking God to tell me what to do," she said. "I didn't know what to do. I was scared and I was crying."

Mallard, who faces the possibility of life in prison, said she deserves to go to prison but did not say for how long. She said she "couldn't think to do the right thing" after hitting the 37-year-old Biggs because she was high on Ecstasy.

CBS News Correspondent Bob McNamara reports Mallard was asked if she thought she had gotten away with the crime, and she answered, "Yes." She said she deserved to be punished, and deserved jail.

She also apologized to the man's 20-year-old son, Brandon Biggs, and her own family.

Mallard said her life had been in a downward spiral since the mid-1990s. She had been smoking marijuana several times a day, even while she worked in retirement homes, she said.

Mallard, a former nurse's aide, spoke after friends, church members and family testified on her behalf, seeking leniency from the jury.

Brandon Biggs and other relatives showed no emotion when the verdict was read. Brandon Biggs did not react to Mallard's tearful apology.

On the other side of the courtroom, Mallard's mother and other family members wept as the verdict was read.

Mallard pleaded guilty earlier this week to tampering with evidence by burning the bloody car seat. She faces two to 10 years in prison on that charge.

Authorities had no leads in Biggs' death until four months later, when one of Mallard's acquaintances called police and said Mallard talked about the incident at a party.

Officers went to Mallard's house and found the bloodstained, dented car. They also found the passenger seat burned in the back yard.

Mallard's friend Clete Deneal Jackson testified that she took him to her garage about six hours after she hit Biggs. He said he removed Biggs' body that night and, with the help of his cousin, Herbert Tyrone Cleveland, dumped it in the park.