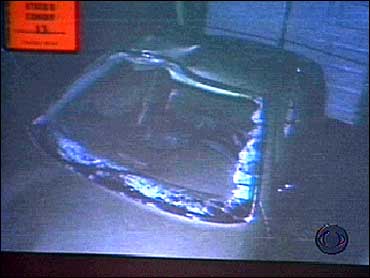 A friend of the woman accused of hitting a homeless man with her car and leaving him to die lodged in the windshield told jurors she urged her to call police and report the accident — to no avail.

Titilisee Fry testified Monday that she went to Chante Jawan Mallard's home after the accident and saw the man's bloody body in the garage, his head and shoulders jammed into the windshield and his legs bent over the roof.

"I ran back inside and said, 'You need to do something. Call 911,'" Fry said. But Mallard refused to call for help. "I told her, 'I'm leaving. I don't want anything to do with this at all,'" Fry said.

Prosecutors and defense attorneys in the murder case both said Mallard, 27, smoked pot, took Ecstasy and drank heavily in the hours before she hit Gregory Biggs on a highway and drove home in the early hours of Oct. 26, 2001. The defense doesn't dispute what happened but says it was an accident, not murder.

Prosecutors say Biggs, a former bricklayer, father of one, down on his luck homeless man, would be alive had Chante Mallard helped him, reports CBS News Correspondent Bob McNamara.

Jurors saw pictures of Biggs' twisted and bruised body Monday as Mallard, a former nurse's aide, went on trial. Before opening statements, she pleaded guilty to tampering with evidence, which could lead to a sentence of up to 10 years. Mallard faces life in prison if convicted on the murder charge.

Although Mallard had taken drugs, prosecutor Christy Jack said she could have stopped at a nearby fire or police station or called an ambulance after she hit Biggs.

Jack said Mallard stopped briefly and tried to get Biggs off her car, but when she couldn't, she drove about a mile to her home. Mallard then called Fry, who came over and told her to call 911.

"Chante refused because she didn't want her parents to know what she'd done and didn't want to go to jail," Jack said.

Defense attorney Jeff Kearney said that after Mallard pulled into her garage and lowered the door, she sat in the car and cried, repeatedly apologizing to Biggs, who was still alive and moaning.

Fry testified that she initially lied to police and a grand jury when she denied knowing anything about Biggs' death, but she said she was telling the truth now and had been granted immunity from prosecution on perjury charges.

Biggs, 37, who had been living in a homeless shelter, was found dead Oct. 27, 2001, his body dumped in a park. Kearney said Mallard's friend Clete Jackson came up with the idea of dumping Biggs' body in Cobb Park.

Jackson and his cousin, Herbert Tyrone Cleveland, pleaded guilty to tampering with evidence to help Mallard. Jackson received a 10-year sentence; Cleveland, nine years. As part of plea agreements, they were to testify at Mallard's trial.

Authorities initially had no leads. But four months after Biggs' body was found in the park, a tipster said Mallard talked about the incident at a party. The day after interviewing the tipster in February 2002, police went to Mallard's house with a search warrant.