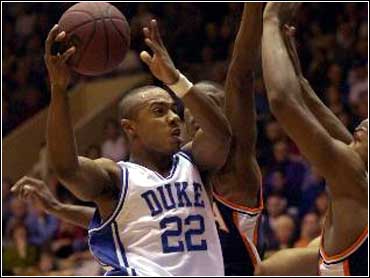 More than anything else, No. 3 Duke won a mental battle Saturday.

Forty hours after beating arch-rival North Carolina in overtime on the road, the weary Blue Devils defeated Virginia 106-86 Saturday, getting 25 points each from Chris Carrawell and Carlos Boozer and 21 from Shane Battier.

"It was such a great game on Thursday night that the papers still had headlines about it Saturday," Duke coach Mike Krzyzewski said, referring to his team's game with the Tar Heels. "But our team was amazingly focused to play today. And we're amazingly tired right now. I asked them to give me their all and they gave me their all."

"We need to get away from the game," Krzyzewski said. "You can see it in their faces. If you look at Chris Carrawell, there is satisfaction in his eyes, but he can't play anymore."

"I'm pretty bushed," the junior forward said. "We played two great teams this week. It took a lot of emotional and physical strength to play these games."

Duke's season-high first-half point total (65) almost matched its shooting percentage (68.4) over the opening 20 minutes. Virginia coach Pete Gillen called three timeouts in the first half, but nothing could slow the Blue Devils' onslaught.

"Our guys got shook, young team got flustered," Gillen admitted. "Certainly we were stung right away."

Carrawell said the crowd was a major factor.

"The fans stayed into it," Carrawell said. "You could tell they were still hyped off the Carolina game. That energy carried over to today's game. Any time the fans can do that, it helps us keep going."

Carrawell and Boozer had 16 points each in a half in which the Blue Devils made 26 of 38 shots and forced 10 turnovers.

The Cavaliers, the second-best offensive team in the ACC, missed their first eight shots and were 3-for-18 to fall into a deep hole early.

"We missed some point-blank layups. I don't know if we were nervous or scared," said Gillen, who has only one senior on his roster. "The more easy shots we missed, the more nervous we got."

Two free throws by Battier midway through the half put Duke up 31-14 and Virginia was on its way to its 11th straight loss in the series.

Any doubt that Krzyzewski was into the game occurred less than two minutes after Battier's foul shots.

The coach yelled across the court at his players, called a timeout and berated his team in the huddle after no one came back to take an inbounds pass as Virginia applied pressure.

After the lecture, Duke scored on 15 of its next 18 possessions to lead 65-33 at the half. Carrawell had nine points over the final 8:25. Boozer added eight.

Virginia got no closer than 18 in the second half.

It was Duke's fifth straight 100-point game against Virginia.