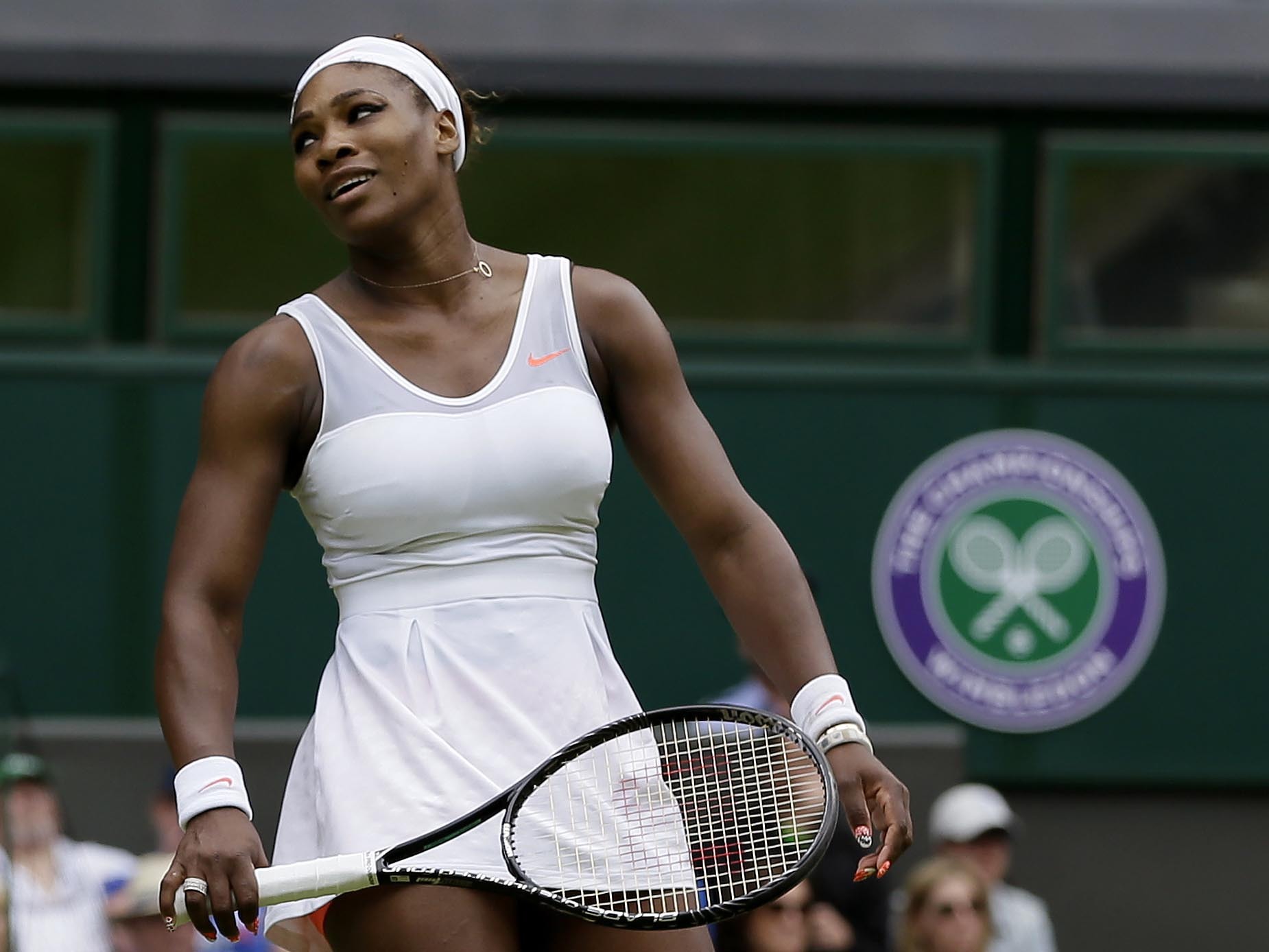 The defending champion and five-time Wimbledon winner failed to close out a see-saw third set Monday, dropping the last four games to Sabine Lisicki of Germany and losing 6-2, 1-6, 6-4 in the fourth round. The result ended Williams' career-best 34-match winning streak.

It was the latest in a string of improbable exits to jolt the tournament, with defending champion Roger Federer and Rafael Nadal knocked out in the first three days along with Maria Sharapova and Victoria Azarenka.

"I probably couldn't be more disappointed," Williams said. "I think I may have backed off of a success. I was playing something successful. I didn't continue that path. The result didn't go the way it could have gone had I continued to play the way I did in the second set."

After dropping the first set, Williams looked to be cruising, winning nine straight games to take a 3-0 lead in the third. The players then traded breaks to give Williams a 4-2 lead, but the American couldn't win another game despite having four break points at 4-3.

Those would have given her a chance to serve for the match. Instead, Lisicki held, broke again, and converted her second match point with a forehand winner.

"I'm still shaking," Lisicki said in a post-match interview, covering her face with her hands to wipe away tears. "I'm just so happy."

Williams said her serve — usually her main weapon — let her down in the third set.

"I felt that I was on the verge of winning," she said. "At that point I just was physically unable to hold serve. ... You have to be ready and willing to hold your serve. I wasn't willing or able, probably didn't even want to hold my serve today."

Lisicki reached the semifinals at the All England Club in 2011 but this will rank as her biggest victory at the grass-court Grand Slam. She has now eliminated the reigning French Open champion the last four times she played Wimbledon, having missed the tournament in 2010. She ousted Sharapova in the fourth round last year.

Britain's Laura Robson also lost. She couldn't recover from her missed chances in the first set and fell 7-6 (5), 7-5 to Kaia Kanepi of Estonia, failing to become the first British woman in the quarters of any Grand Slam since 1984.

Robson, the first British woman to reach the second week at Wimbledon since 1998, served for the first set at 5-4 but was broken, then led 5-2 in the tiebreaker. She double-faulted at 5-4, with neither serve coming close to going in — the first one went about 5 feet long and the second bounced into the net.

"I had my chances here and there and I just didn't take them," Robson said. "At that point, I was just trying to will myself to play unbelievable tennis when just making a serve would have been fine. But, as cliche as it sounds, it's all part of the learning experience. The more I get myself into those kinds of situations, the more I'm going to benefit."

Instead of a big headline Williams vs. Robson matchup, Kanepi will now face Lisicki in the quarterfinals.

Fourth-seeded David Ferrer overcame another slow start to beat Ivan Dodig of Croatia 6-7 (3), 7-6 (6), 6-1, 6-1. Having trailed twice in the previous round before winning in five sets, Ferrer struggled initially to create opportunities on Dodig's serve and was two points from going two sets down against the Croat. But he dominated the final two sets, breaking Dodig five times and clinching the match with a forehand winner.

On a busy day at Wimbledon with every round-of-16 match to be played, Kvitova was the first to reach the last eight, beating Carla Suarez Navarro of Spain 7-6 (5), 6-3. She will play Kirsten Flipkens of Belgium, who reached her first career Grand Slam quarterfinal by ousting Flavia Pennetta of Italy 7-6 (2), 6-3 — a year after her ranking plummeted to 262nd because of injuries.

Poland will send two men into the quarterfinals for the first time after 24th-seeded Jerzy Janowicz and 130th-ranked Lukasz Kubot each won five-set matches.