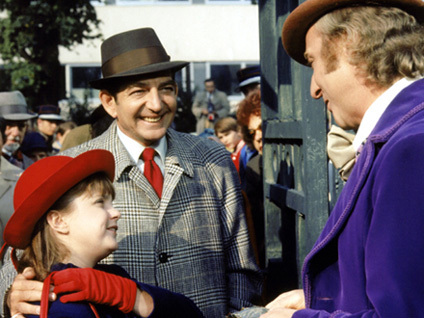 ENCINITAS, Calif. - Leonard Stone, a venerable film and TV character actor best known as the father who accompanied chronic gum-chewer Violet Beauregarde on a tour through a far-out candy palace in "Willy Wonka and the Chocolate Factory," has died.

Granddaughter Lindsey Fryman-Borchard tells The Associated Press that Stone died of cancer Wednesday in Encinitas, Calif., a day before his 88th birthday.

He was best known as fast-talking father Sam Beauregarde in the 1971 film that starred Gene Wilder as Willy Wonka. Stone watches in horror as his daughter turns into a giant blueberry and utters the famous line "Violet, you're turning violet, Violet!"

The Oregon native was nominated for a 1959 Tony Award as Best Supporting or Featured Actor (Musical) for "Redhead."

Among the many comedies he appeared in were "McHale's Navy," "The Real McCoys," "MASH," "Nanny and the Professor," "Sanford and Son," "The Bob Newhart Show," "All in the Family," "The Partridge Family," "One Day at a Time," "Night Court" and "Alice."

He had a recurring role in "Barney Miller," and appeared in the soap opera "General Hospital."

His other film credits include Samuel Fuller's "Shock Treatment," "Soylent Green," "Mame," "I Love My Wife," "Zigzag," "Getting Straight," "Angel in My Pocket" and "A Man Called Dagger"; the Jerry Lewis films "The Big Mouth" and "Hardly Working"; and voice work for "Avatar: The Last Airbender" and "American Pop."

In 2000 Stone appeared as a contestant on "Wheel of Fortune," and won a trip to Bermuda.