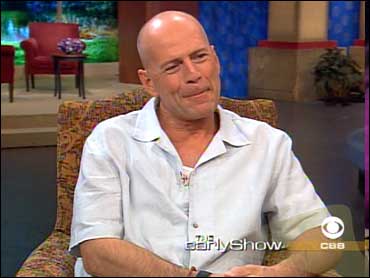 If you listen closely, you can hear some David Addison in "RJ," the mischievous raccoon voiced by Bruce Willis in the animated feature, "Over the Hedge."

He told co-anchor Julie Chen on The Early Show Monday that it was the studio's idea to revive a bit of Addison, and he was happy to go along.

"You know what? I miss David Addison," Willis said. "And I miss playing that character. It was fun to try to find it again, and find him again. If you listen, if you ever see the film again, it's not — I mean, it's my voice, but it's pitched up a little bit.

"A lot of people didn't get it right away. They said, 'Oh, yeah, that's it.' … We all came to that. It wasn't done mechanically. But it was something they asked me to get to. Because it was too — because my real voice is … kind of gruff."

Willis observed that anyone who thinks doing voiceovers for movies is easy, is mistaken: "It's really hard. It was. But this particular film, by far, was the hardest I've ever worked because, when you watch the film, it seems like we were all sitting around someone's house and they handed us microphones, and we just kind of did the film in a couple day's time. Quite the contrary: None of us worked together. So Garry Shandling (who voiced 'Verne') would do something on his day of looping," (I would on mine, and so on).

It took Willis a year-and-a-half to finish his work on "Over the Hedge."

Willis added that he was alone in the recording booth, though he had "a little camera on me, recording my physical movements."

And his performance was heavily directed — guidance he says he appreciated.

"I was asking questions, 'Is that it? Is that funny?' (I had no one to play off of), no audience. You're doing line-by-line. There's no way to get any kind of rhythm, comic timing going."

"I would do it again," Willis said. "It was fun. It was really challenging. And fun to try to make people laugh. It's the best thing."