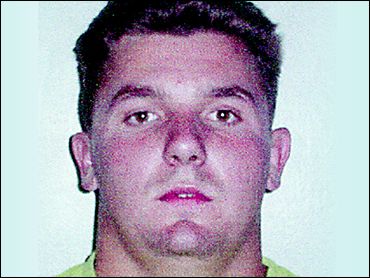 William Nesler - a fugitive in connection with the beating death of an acquaintance - was once known as a young rape victim whose vigilante mother walked into a courtroom and shot his accused molester five times in the head 11 years ago.

Since the acts that led to that day, Nesler's life has never been the same.

Nesler, 23, has been in jail nearly 20 times in the past five years, in cases ranging from complaints about his Rottweiler to robbery and drug charges.

And now he is wanted for murder for allegedly beating a disabled neighbor to death, just an hour after completing a jail sentence for attacking the same man in a dispute over tools. Authorities do not know where he is hiding, but they consider him armed and dangerous.

Although they recognize that his upbringing has played a role in his troubles, friends and family members said they were still surprised by the murder allegations.

"He was a great kid," said Sacramento bounty hunter Leonard Padilla, a family friend. "I would never have believed it would come to something like this, though a lot of times there's a progression of activity."

Padilla, who got to know the Nesler family more than a decade ago, said he's talked with an FBI agent about helping bring Nesler in safely if he can be persuaded to surrender.

When Nesler was young, his parents left the faded gold rush towns of the Sierra Nevada foothills in the hopes of striking it rich by mining in Africa, family members said. The couple eventually split and Ellie Nesler returned with William - known as Willie - and his sister to California.

When Willie was 6 or 7 years old he allegedly was molested by Daniel Driver at a Christian camp. He said he didn't tell anyone for nearly a year because Driver had threatened to kill his family.

After two years on the lam, Driver was arrested and brought to court on April 2, 1993, for a hearing on whether he would face trial on charges of molesting Nesler and three other boys.

Ellie Nesler said her son couldn't testify. He was vomiting. She feared the twice-convicted molester would walk free.

During a recess, she pulled a Raven .25-caliber semiautomatic pistol from the purse of her other sister, Jan Martinez, and shot Driver in the head.

"He deserved to die," she told police. "Maybe I'm not God, but I'll tell you what - I'm the closest damn thing to it for all the other little boys."

She later said, "My little boy can hold his head up now. He doesn't have to be afraid of Danny."

During Ellie Nesler's trial, Martinez testified that the abuse changed her nephew from "a very beautiful little kid... into a mean little brat." By age 11, he had changed schools three times and was spiteful and angry.

Ellie Nesler, derided by some for taking the law into her own hands and praised by others for exacting her own justice, served only three years of a 10-year manslaughter sentence when a court overturned the conviction due to juror misconduct. She is now in a California prison for charges related to manufacturing methamphetamine.

Authorities say William Nesler has been chronically unemployed in recent years. Cory Njirich said his father gave Nesler a little work helping tear down part of a former gravel plant next door to where Nesler lived. Although he stood 6-foot-2, weighed 225 pounds and was covered with tattoos of comic book characters, he was mostly just a shy observer who seemed out of place.

Recently, Nesler had helped clean up his family's property in this mountainous area of California. David Davis, 45, disabled from a neck injury while working in oil fields in Wyoming, was hired to help clear the property, which had turned into a squatter's camp, according to Davis' mother, Rita Brown.

Nesler pleaded guilty to assault and was sentenced to two months in jail. He was released at 4 a.m. Sunday, and the alleged beating happened about an hour later.

Relatives say they've heard from William Nesler a few times since police put him on the wanted list, and they are urging him to turn himself in to a local bounty hunter.

"We told him he needs to come in, but he said the sheriffs are going to kill him," said one of his aunts, speaking on condition of anonymity, and adding that the family doesn't know where Nesler is.

Police have said that Nesler is most likely still in the state and they are focusing their search in his home county and in neighboring counties.

Police have been searching former gold rush towns in the Sierra Nevada foothills now better known as tourist stops on Highway 49. "He's out and about," Dittberner said. "He could be anywhere."