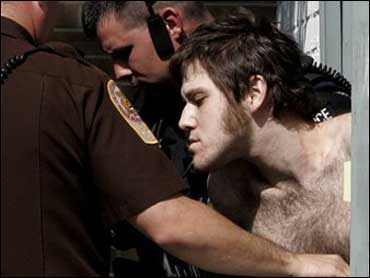 RICHMOND, Va. -- William Morva showed signs of mental illness long before he killed two men during an escape from custody in 2006, friends and family say. In the years leading up to the killings, Morva began sleeping in the woods, showed up barefoot at his father's funeral and was banned from a school campus after being found half naked on a bathroom floor.

Now Morva is days from being executed in Virginia for crimes his attorneys say were spawned by delusions that made him fear for his life. The case of the inmate, now 35, has pushed to the forefront the debate over whether people with mental illness should be shielded from the death penalty.

"He has never understood completely exactly what he did, the ramifications of what he did, the lives he has upset," the man's mother, Elizabeth Morva, said in a video, urging Virginia Gov. Terry McAuliffe to halt the planned lethal injection Thursday and commute his sentence to life without parole.

CBS Roanoke affiliate WDBJ-TV reports the government of Hungary, where Morva was also a citizen, and the European Union are joining the final efforts to stop the execution.

"It's an extraordinary step on their part," Dawn Davison, a senior staff attorney from the Virginia Capital Representation Resource Center, told the station. "This is not something they ordinarily do. They met with him and asked that he grant clemency, and they also followed that up with a letter, which we're really encouraged by their interest in his case."

Jailed in 2005 on accusations that he tried to rob a convenience store, Morva was then taken to a hospital to treat an injury. There, he attacked a sheriff's deputy with a metal toilet paper holder, stole the deputy's gun, and shot an unarmed security guard, Derrick McFarland, before fleeing.

Morva's escape set off a police manhunt that shut down Virginia Tech's campus the first day of the school year. A day later, Morva fatally shot another deputy, Eric Sutphin, before Morva was found in a ditch with the deputy's gun nearby.

Jurors were told Morva suffered from a personality disorder that resulted in "odd beliefs," but not delusions. He has since been diagnosed with delusional disorder, a more severe mental illness akin to schizophrenia that makes it impossible for him to distinguish between delusions and reality, his attorneys say.

His lawyers say Morva escaped and shot the two men because he believed he was going to die in jail.

"Look, don't you understand that they are trying to keep me in here? Somebody wants me to die, and I don't know who it is," Morva told his mother in a call from jail, before his escape.

A prosecutor in Morva's case called it "highly inaccurate" that jurors didn't have a full picture of Morva's mental health, noting that several experts who examined him agreed he had a "superior IQ" and suffered from a variety of personality disorders. Montgomery County Commonwealth's Attorney Mary Pettitt said in a letter to McAuliffe that to "assert some 10 years later that all three of the original experts were wrong is absurd."

"With enough time and motivation one can always find an expert to say what you want to hear but that doesn't mean it's true or accurate," Pettitt told the governor. She declined to be interviewed by The Associated Press.

Relatives of Morva's victims either didn't return phone messages or couldn't be reached.

While the U.S. Supreme Court has said people who have intellectual disabilities and commit crimes when they are juveniles cannot be executed, the justices haven't extended that exemption to adults who were mentally ill when they committed their crime. The court has said only that states cannot execute people who are "insane" and don't understand why they are about to be put to death.

Proposals to ban the death penalty for people with severe mental illnesses have recently been considered in several capital punishment states, including Virginia. None have passed in part because critics fear it will result in every defendant alleging a mental illness, said Ronald Honberg, a senior policy adviser with the National Alliance on Mental Illness. The group is urging McAuliffe to grant Morva clemency.

At trial, Morva told jurors his name was Nemo, calling that a "slave name." He smiled, snapped his fingers and nodded at jurors when the verdict of death was read as if he "won the lottery," Derrick McFarland's father commented at the time. Morva also has expressed a belief that a former presidential administration conspired with police to imprison him and that his own attorneys were working against him, but has never received treatment for his mental illness, his lawyers say.

"If he had gotten treatment, could all of this have been prevented? Hindsight is 20/20 but one can't help but wonder," Honberg said.

McAuliffe, a Catholic who says he personally opposes the death penalty but has an obligation to uphold the law as governor, has called off one execution since taking office. In April, he granted clemency to Ivan Teleguz, saying jurors in the murder-for-hire case were given false information that may have swayed sentencing.

Virginia governors have halted executions for mental health concerns before. In 2008, Gov. Tim Kaine commuted a man's death sentence amid concerns about his competence. A decade earlier, Gov. Jim Gilmore spared a man with schizophrenia.