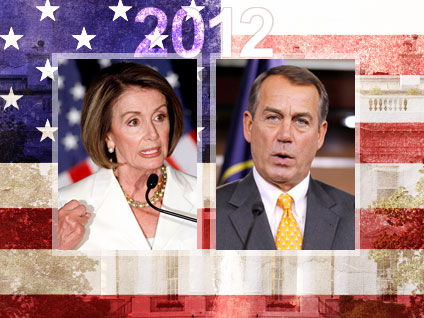 Fresh off a major shift in power in the House, we might expect another volatile congressional election in 2012.

So overall, 56 Democratic and 52 Republicans won with majorities of 56 percent or less, and those races comprise 23 percent of the entire House. Add the unpredictable effects of redistricting to the 2012 equation, and the prospect of a 4th straight election with a turnover of 20 or seats is plausible.

This adds to the recent history of swings: the 2006-2010 trend contravenes a pattern of little turnover and almost unanimous incumbent retention that marked the House contests from 1998-2004.

The massive Democratic defeat sustained in the 2010 election was absorbed in both upscale (high education and income levels) and more downscale (lower income, rural and small-town) districts. Although many districts contain complicated demographic mixes, we can identify 26 suburban, urban and exurban districts lost by Democrats, and at least 34 rural, small-town and mixed districts moving from Democratic to Republican hands in 2010. Overall, Democrats were soundly defeated with suburban voters, after garnering a slight majority of them in 2008.

Because more than 50 percent of the nation lives in suburban or exurban districts, that trend, combined with the predictable loss of rural districts, suggests a difficult road back to power for the Democrats. Or does it? We have lived through a recent era of confident pronouncements by both parties proclaiming a permanent majority. We may have instead returned to the pattern of the 1940's and early 1950's, when the two parties gained and lost control of Congress on a regular basis.

One place to watch once again will be the northeast, where GOP inroads marked a big reason for their big night. While Republicans held and expanded their base in southern and border states, the Democrats sustained erosion in the formerly "solid Democratic eastern" states.

The most astonishing single-state results of the 2010 election may have been the loss of seven Democratic seats in New York (assuming the Republican leaders survive recounts in the 1st and 25th districts). On the other hand, it may have been unrealistic to imagine that the previous 27-2 Democratic majority of the New York congressional delegation was sustainable in the short or long term. Still, losses in urban and suburban districts in the New York City area, combined with more predictable losses in rural/small town upstate areas, is a potential sign of trouble for northeastern Democrats.

Similarly, losing 5 seats in Pennsylvania, including two in the Philadelphia suburbs and two more in other parts of Eastern Pennsylvania, is a blow for Democrats as the 2012 cycle approaches. Democrats also lost their stranglehold on New England districts, as Republicans won both seats in New Hampshire.

Where did the GOP House Gains Come From?

Democrats did survive formidable challenges in both Connecticut and Massachusetts, preserving their 100 percent control of those states.

Further west there was better news for Democrats, where they may hold on to all of their California seats (pending recounts), survived a tough challenge in Oregon and lost just one seat in Washington while gaining one in Hawaii.

In the critical industrial midwest, where presidential elections are typically decided, Democrats lost 5 seats in Ohio, including urban-suburban districts in Columbus and Cincinnati, sustained a 3-seat loss in Illinois, a two-seat decline in Wisconsin and two in Michigan and Indiana.

The disappearing Democratic hold on non-minority southern seats reappeared after a four year absence, as Republicans gained seats in Florida (4) - a critical state for President Obama in 2008 - as well as Texas (3), Tennessee (3), Georgia, South Carolina, Virginia (3) and North Carolina, the last two being important states that Barack Obama carried in 2008.

Mark Gersh is Washington Director, National Committee for an Effective Congress, and a CBS News Consultant