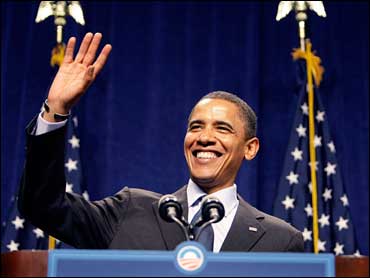 Back in 2004, hip-hop mogul Russell Simmons was in Boston for John Kerry's coronation as the Democratic nominee, staging a big hip-hop summit to draw new voters. This year, though he's a Barack Obama supporter, he plans to sit out the Denver convention.

"I didn't really feel they needed any more celebrities," says Simmons, chairman of Rush Communications, who'd been set to speak at a yoga convention on the sidelines, but changed his plans. "They have plenty. I didn't know if it would be helpful."

It's no secret that many celebrities, especially of the Hollywood variety, support Obama enthusiastically. Hollywood has always been heavily Democratic, and Obama's youthful charisma and message of change has made passionate fans of stars like George Clooney, Ben Affleck and countless others.

But with the John McCain camp trying to paint Obama as a lightweight celebrity on the level of Paris Hilton and Britney Spears, Obama's folks might be getting a little jittery about the star power likely to converge on Denver.

Clooney, for one, won't be part of it: He's long maintained that Hollywood stars don't do the candidates any good in the heartland, and he's said to be planning instead a September fundraiser for Obama far from Denver - in Geneva, Switzerland.

But Affleck will be at the convention, and Oprah Winfrey, Obama's most influential celebrity booster, plans to be in the audience when her man accepts the nomination at Invesco Field. Others expected: Spike Lee, Charlize Theron, Josh Brolin, Annette Bening, Susan Sarandon, perhaps Leonardo DiCaprio and Gwyneth Paltrow. Want even more Oscar-caliber acting power? Sean Penn will be around, at a rally organized by Ralph Nader.

Kanye West is just one of the entertainers performing at various sideline events, as are the Black Eyed Peas, whose frontman, will.i.am, has released not one but two star-studded music videos in tribute to Obama. Sheryl Crow, Melissa Etheridge, Cyndi Lauper and Stevie Wonder are expected. Rock the Vote, a nonpartisan group, plans to feature Jakob Dylan, Fall Out Boy and N*E*R*D at one party, singer Ashanti and actress Idina Menzel at another.

Of course, the 2004 Democratic convention in Boston was chock full of celebrities of all stripes, too. The difference now is that the Republicans are specifically trying to hurt Obama by focusing on his celebrity appeal.

So what's a campaign to do?

"If I were in the Obama camp, I would lock Ben Affleck and Barbra Streisand away in a closet for the rest of the year," says Todd Harris, a Republican strategist and former aide to candidate Fred Thompson. "To the degree that all of this celebrity glitz and glamour reinforces an emerging negative view of Obama, which is that he is all glitz and no experience, it could be very detrimental."

Democratic consultant Chris Lehane takes a more measured view. The Obama campaign, he says, is facing "the age-old conundrum for Democrats who every presidential cycle in recent memory have had the support of what I call the sparklies - only to want to downplay them once they get to the fall," because it might fuel stereotypes of Democrats as out of touch.

On one hand, says Lehane, who once worked for Al Gore, the celebrity factor can be a huge asset, especially with young voters, as it was for Bill Clinton. On the other hand it can backfire - Kerry hardly benefited when, at a pre-convention fundraiser, Whoopi Goldberg used sexually explicit references to refer to President Bush.

So are Obama's folks jittery? "I think that Team Obama is a confident bunch and the jitteriness - to the extent it exists - comes from others in the party primarily out of a concern of how tight the race is," he says. "The Obama high command is a smart lot. My guess is that they will use the convention to lay out the vision they need to seal the deal."

Among celebrities, it's not just Clooney who seems sensitive to the potential problems. Actor-director Affleck, who was ubiquitous at the 2004 convention, will be in Denver too, but isn't interested in talking about it beforehand, his publicists say.

Ken Sunshine, whose public relations firm represents Affleck along with a long roster of both celebrities and politicians, thinks the whole celebrity issue is overblown.

"This phenomenon is so overanalyzed, you'd think there were no other issues in the campaign this year," he said.

"I don't think it's fair to lump all celebrities together," Sunshine adds. "Most serious celebrities don't pretend to be anything more than activists and good citizens. Why should Ben Affleck be penalized just because he's an actor and a director? He's smarter, more articulate, better read on foreign policy that 98 percent of us."

And Clooney, whose commitment to political causes is well known, shouldn't be staying home, in Sunshine's view. "Why shouldn't he be in Denver? He has nothing to be ashamed of."

As for Winfrey, the one star who's perhaps in a category of her own in terms of clout and power, she'll be in Denver but only as an audience member on the big night, according to her company, Harpo Productions. She has no plans to speak publicly.

But if she did, it would probably do some good, says Simmons, the hip-hop mogul. "It depends on the celebrity whether it hurts or helps," he says. "I don't think Oprah hurts! I think she helps a lot."

Simmons himself, who did some campaigning for Obama during the primaries, is ready to be of service.

"I'm looking for guidance from the campaign," he says. "They haven't called. But if they need me, I'm on a plane. Whatever they want."