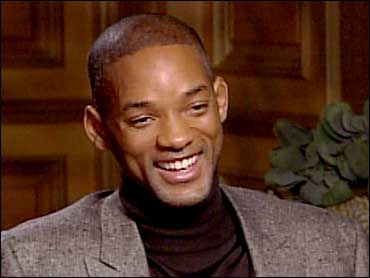 Will Smith remains one of Hollywood's biggest leading men. His latest film, "The Pursuit of Happyness," opened No. 1 at the weekend box office, taking in $27 million.

Smith has already received a Golden Globe nomination and the Oscar buzz has begun for his role in his 15th film, which he says is the one he is most proud of.

"The Pursuit of Happyness" was inspired by the true story of Chris Gardener, a single dad forced into homelessness while trying to climb the corporate ladder.

"What's so amazing' about … this film that I, I connect strongly to — and Chris Gardner and I have this in common — the idea that we both believe that our desires and our commitment to the ideas of our future are all that matter," Smith said.

Smith said that when he was a teenager and embarking on his musical career in hip hop he never considered failure an option.

"Confucius said: 'He who says he can and he who says he can't are both usually right,' " Smith said. "You can call it naiveté, you can call it arrogance. Barack Obama called it the audacity of hope. The first step before anybody else in the world believes it is you have to believe it. Failure is not an option. There's no reason to have a plan B 'cause it distracts from plan A."

The film's title comes from the Bill of Rights promise of life, liberty and the pursuit of happiness. Smith said the subtle way that phrase is worded makes each person responsible for his or her own destiny.

"Don't mean you get it," he said, "It's not life, liberty and happiness, you know? You know, Thomas Jefferson was, was a, a real poet. He was slick with that pursuit of happiness. Because the pursuit puts it back on you. You know?"

The secret to Smith's success, he said, is that he made up a "new old saying" and lived by it: "Being realistic is the most commonly traveled road to mediocrity. Why would you be realistic? What's the point of bein' realistic? I'm gonna do it. It's done. It's already done. The second I decide it's done, it's already done. It's just now we just gotta wait for y'all to see."

Even though many people are saying that Smith is a strong contender for the Oscar, he says that was not his motivation for making this film.

"My goal was … I needed Chris Gardner to feel that his family and his experience was told to the world properly," he said. "And the moment that Chris Gardner looked at me with, with tears in his eyes and he said, 'I am forever indebted,' I was done. Everything beyond that point is gravy."