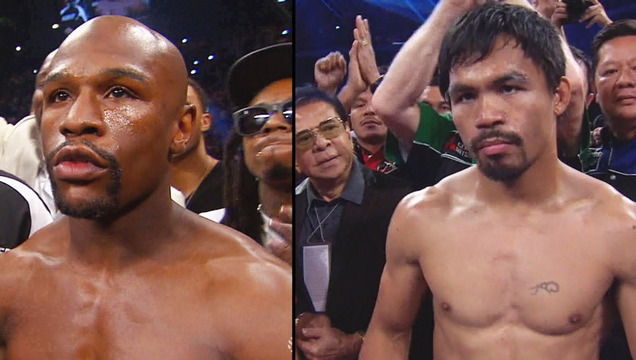 When Floyd Mayweather, Jr. and Manny Pacquiao finally confirmed their long-anticipated bout would go down on May 2, sports fans immediately circled the date on their calendar.

It just so happens that the "most exciting two minutes in sports" (aka The Kentucky Derby) will be held on the same day. Those two events alone have thrust this coming Saturday into rarified sports air. But with the NFL draft underway and NBA and NHL playoff games also on the schedule, could May 2, 2015 be the "most exciting 24 hours" in sports history?

The high-profile events on Saturday are already guaranteed to be a historic financial bonanza. Revenue for Pacquiao-Mayweather fight may hit a record $400 million, pay-per-view buys are nearing 4 million and single tickets have fetched more than $40,000. One writer predicts that wagering on the fight and the Kentucky Derby could hit $300 million.

Even before the "fight of the century" date was announced, May 2 was shaping up to be an exciting sports day. In addition to the Run for the Roses, the sports schedule is loaded:

Of course, this Saturday's ultimate place in the sports pantheon won't depend on the schedule but the drama of the fight, the thrill of the race and the quality of the games. In that regard, Saturday may not be able to top an epic sports day 80 years ago.

On May 25, 1935, track-and-field star Jesse Owens set three world records and tied a fourth at a meet at the University of Michigan. On the very same day, a 40-year-old slugger playing for the Boston Braves hit three home runs -- including the final one of his career. The player's 714th career homer was the first ball ever to be hit completely over the right-field roof at Pittsburgh's Forbes Field.

The player's name was Babe Ruth.