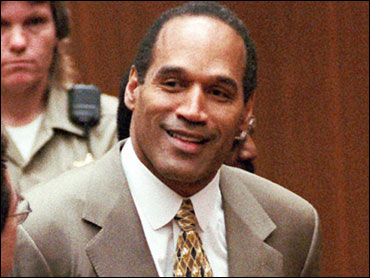 ( (AP Photo/Myung J. Chun))
O.J. Simpson in victory after the jury acquitted him in the murders of Nicole Brown Simpson and Ronald Goldman in 1995. Will he win again at a rare hearing for bond while appealing his verdict?

LAS VEGAS (AP) Few in Nevada legal circles believe O.J. Simpson has any real chance at freedom when the state's Supreme Court justices consider letting him trade a prison cell in rural northern Nevada for a golf course in Miami while he appeals his conviction in a gunpoint hotel room heist.

What really has them abuzz is that Nevada's only appellate court agreed to schedule oral arguments Aug. 3 to hear Simpson's plea to be allowed to post bond.

"It's unusual. This is a situation where the Nevada Supreme Court might be accused of politics or being star-struck," said Michael Green, a state history author and professor at the College of Southern Nevada in Las Vegas. "But this is also a case where they'd want to make sure all the i's are dotted and the t's are crossed."

The Nevada Supreme Court received 1,842 appeals in fiscal 2008, and can take two years to decide cases, court spokesman Bill Gang said. Excluding motions by inmates acting as their own lawyers, the court hasn't received more than five requests for bail pending appeal in any year since 2000, Gang said.

Only one inmate, Paul Thomas Picetti, gained release in 2007 on a written request pending his appeal of a felony drunken driving conviction.

Not once the last eight years has the court held oral arguments.

But no Nevada prison inmate is as high-profile as the NFL Hall-of-Famer, television star and celebrity criminal defendant acquitted in the 1994 slaying of his ex-wife, Nicole Brown Simpson, and her friend, Ron Goldman, in Los Angeles.

It's been more than 30 years since the state high court granted a high-profile defendant freedom pending appeal. That man, Lawrence Arvey, skipped town.

"That hurt us all," said William Terry, a veteran Las Vegas defense lawyer who helped represent Arvey. "The Supreme Court is kind of like an elephant, they don't forget."

Arvey, a big man and larger-than-life casino figure who wore jogging suits and big wigs to court, went by several names and nicknames including "Candy Man," "Mr. Chin" and "Big Fat Daddy." Some of the most prominent attorneys in town, including current Las Vegas Mayor Oscar Goodman and Harry Claiborne, represented him.

Arvey was sentenced in April 1978 to life in prison for sex crimes with minors. The high court granted his release two months later on a $100,000 bond. "Nobody thought he was a flight risk because in 1978 that was such a large amount of money," Terry said.

Arvey, who would be 69, is still listed as a fugitive.

Terry said that in scheduling oral arguments in Simpson's case, the court might be signaling that some issues in his appeal have merit.

"In order to get bail pending appeal, you have to show there is a potential of reversal on appeal," he said.

Simpson's lawyer, Yale Galanter, said that's what he hopes, too.

"I know my burden is high. I know them granting bond would be a really rare thing," said Galanter, whose 30-page appeal calls Simpson's trial so rife with errors by the judge and prosecutors that his conviction should be reversed.

Galanter said Simpson, who has a residence in Miami, is so famous he couldn't possibly flee if he is released from prison.

"He's got no place to go, no place to hide," his lawyer said. "News crews follow him to the restaurant, to the golf course, to school to pick up his kids. He's truly one of the most recognizable people on the planet."

"The unjust outcome of not granting him a bond," Galanter added, "is that if the case is reversed, he will have sat in prison and been punished for nothing, while the appeal winds its way through the system."

Simpson turned 62 this month at Lovelock Correctional Center, 90 miles (145 kilometers) northeast of Reno. He's been working as a gym janitor while serving nine to 33 years for kidnapping and assault with a deadly weapon in the gunpoint robbery of two sports memorabilia dealers in a Las Vegas hotel room in September 2007.

They have separate appeals pending with Supreme Court, along with requests to be let out of prison pending a decision.

Neither will be in court for separate 30-minute oral arguments their lawyers and prosecutors will make before three justices of the seven-member state high court — Michael Cherry, Nancy Saitta and Mark Gibbons. Gibbons is not related to the state's Republican governor, Jim Gibbons.

JoNell Thomas, a veteran Las Vegas lawyer in the special public defender's office, called the court's decision to hold a bond hearing for Simpson and Stewart "encouraging" for other appellants. "This tells me I need to file more bond motions on appeals," Thomas said.

Howard Brooks, the Clark County deputy public defender who oversees appeals for every convicted indigent defendant in Las Vegas, called it unlikely that Simpson will win his appeal, and more unlikely that he'll be released on an appellate bond.

"The Nevada Supreme Court reverses about 2 to 5 percent of criminal appeals. That is a very low rate," Brooks said. "The bottom line is, I'd say his chances of getting bond are one in a million."

Justices have denied requests for bond by other high-profile defendants, including Sandy Murphy, who served nearly four years in the 1998 death of Las Vegas casino executive Ted Binion before her conviction was overturned. Murphy and co-defendant Rick Tabish won a new trial and were acquitted of murder in 2004.

The court also denied bond in 2004 to Peter Bergna, a former Lake Tahoe-area art appraiser whose conviction in the death of his wife in a staged car crash was later upheld.

Thomas, who read the Simpson appeal brief, said she doubted the high court would reveal during the hearing whether the justices think Simpson has a good case on appeal.

"All they're saying is there are interesting issues here," she said. "That's a long way from saying they're going to reverse the case."